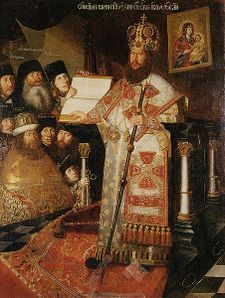 Nikon of Moscow (1605-81) was patriarch of the Russian Orthodox Church from 1652 to 1658, during which he oversaw and enforced extensive revision of the church service books and practices in Russia to bring them in line with the books and practices of the Churches of Constantinople, Jerusalem, and Alexandria. His policies for enforcing the reforms caused a backlash from the defenders of the old practices and resulted in a long standing schism in the church that has been referred to as the Raskol (Russian for "schism") with the defenders called Old Believers.

The future Patriarch Nikon was born Nikita Minin on May 7, 1605, into a peasant family in the village Valmanovo, near Nizhny Novgorod. His father, a farmer, was named Mina. Nikita's childhood was troubled and at one time he ran away from home to escape an inhumane stepmother. He was educated in a monastery and married before being ordained a priest. Through the efforts of Moscow merchants, impressed by Fr. Nikita's eloquence, he was transferred to a large Moscow parish. However, after losing his three small children during ten years of married life, he decided to enter a monastic life. Persuading his wife to become a nun, he entered the Solovetsky Monastery on the White Sea, receiving the name Nikon upon taking his monastic vows.

Entering the monastery, he established himself as a hermit on the nearby Anzersky island that was a dependency of Solovetsky. He later joined the Kozhuzersky monastery, in the Novgorod diocese, after breaking with the Solovetsky monks over allegations of misuse of alms. In 1643, Hieromonk Nikon was named hegumen. In his duties as hegumen he often visited Moscow, where in 1646 he met the pious Czar Alexis. Impressed by Nikon, Alexis, who had become czar in 1645, soon included Nikon among his close advisers.

In rapid succession Alexis raised Nikon to the dignity of archimandrite and assigned him to head the Novospassky monastery in Moscow in 1646. Then in 1648 the czar appointed him metropolitan of Novgorod. In Novgorod, Nikon was active founding almshouses and pursuing good works and even was responsible for suppressing a revolt in 1650. Then, after yielding to strong persuasion, Nikon was elected Patriarch of Moscow on August 1, 1652, succeeding Patr. Joseph who had died earlier in the year.

Nikon became patriarch in the midst of the opening of Russia to the ideas and culture of western Europe after centuries of isolation due to the Tatar yoke and the Times of Trouble. With the opening of Russia the service books and customs of the Orthodox church in Russia came under question from the Orthodox patriarchs of the ancient world. But the initial reforms that were considered by the church in Russia were minor and were enforced weakly by Patr. Joseph. Patr. Nikon, however, approached the reforms more vigorously. He embarked on a more thorough reform after having consulted with the Patriarchates of Jerusalem, Constantinople, and Alexandria. In a country that had been ingrown, insular, and backward for centuries the reaction was great. As the resistance to the reforms mounted among primarily the "white" clergy, the staff of the patriarchate used the full authority of Nikon's position to ruthlessly enforce the reforms, even with imprisonment and exile of the Old Believers as the opposition became known.

With the establishment of the Moscow patriarchate in 1589, the position assumed a political as well as ecclesiastical importance. Then, when Michael Romanov became czar, ending the Time of Troubles, his father, Philaret Nikitich, became patriarch and formed a sort of co-ruler relationship with the czar. This relationship continued between Czar Alexis and Nikon. As the reforms proceeded, Nikon's enemies finally convinced Alexis that the patriarch was eclipsing the authority of the czar. As a result the relationship between the czar and Nikon cooled. In reaction Nikon divested himself of his patriarchal vestments and retired on July 19, 1658, to his new monastery, the New Jerusalem, until such time as the czar would reaffirm his confidence in Nikon and his programs.

Such a summons never came. Additionally, efforts to formally depose Nikon were unsuccessful. Then, after eight years a synod was convened on November 18, 1666, in the presence of the czar, that after deliberations found Nikon guilty on December 12 of reviling the czar and the church, of deposing Bp. Paul of Kolomna contrary to the canons, and of beating and torture. He was sentenced to loss of his sacerdotal functions, made a simple monk, and exiled that day to the Ferapontov monastery on the White Sea.

Yet the same synod, after deposing Nikon, confirmed all his reforms, continued to enforce their use, and anathematized all who refused to accept them, such as the priest Avvakum. By the time of Czar Alexis' death in 1676 Alexis repented the harsh treatment of Nikon and on his death bed asked for Nikon's forgiveness. Nikon lived until August 17, 1681. He was buried in Moscow with all the honors of a patriarch, and after his death all the decrees against him were revoked.