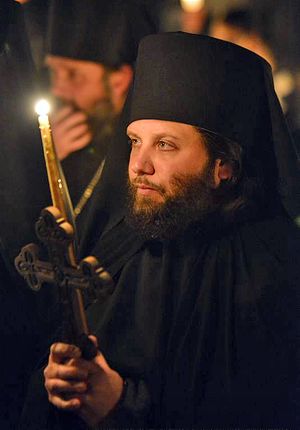 Hieromonk Nicholas (Olhovsky) (Russian: Николай (Ольховский)) is a hieromonk of the Russian Orthodox Church Outside of Russia and Caretaker of the Kursk Root Icon of the Mother of God of the Sign[1], who was nominated on December 9, 2013 by the Synod of Bishops of ROCOR as a candidate for the vacant Manhattan cathedra of the Diocese of Eastern American and New York[2]. This was confirmed on March 19, 2014 by the Holy Synod of the Russian Orthodox Church[3].

The consecration will take place during a meeting of the Synod in San Francisco celebrating the 20th anniversary of the glorification St. John (Maximovitch) the Wonderworker.