The Monastery of the Holy Mother of God "Pantanassa" (Queen of All) is a monastic community for men under the Greek Orthodox Archdiocese of Australia. The monastery is located in Mangrove Creek and Mangrove Mountain, New South Wales (west of Sydney), and was established in 1976 under the omophorion of His Eminence Archbishop Stylianos of Australia. The current abbot is Archimandrite Eusebios; there are currently 2 priestmonks (including the abbot) and three monks in residence.

In 1976, shortly after the beginning of Archbishop Stylianos' tenure, the Archbishop establishes the Holy Monastery of the Transfiguration of our Lord, with Archimandrite Stephanos (Pantanassiotis) being the abbot and residing at St Arsenios House. Fr Stephanos resigns from Vicar-General and devotes himself to the monastery, where he is widely sought out for confession; however, even though the monastery is situated in Earlwood, Sydney, it is a principle of the monastery that no weddings or baptisms are celebrated there. 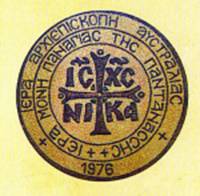 On July 16, 2005, the foundation stone of the main church ('katholikon') was laid by Archbishop Stylianos, assisted by Bishop Seraphim. Soon after, the driveway for the new monastic complex was finished, making possible the construction of the new complex. The first phase of this construction - the church and first part of the living quarters - was begun in February 2006. Construction continues and will continue for the foreseeable future.

Around 2011, Elder Stephanos retired as abbot of the monastery, while remaining at the monastery; Hmk Eusebios succeeded him, being elevated to Archimandrite on September 14 by Bp Iakovos (Tsigounis) of Militoupolis and subsequently enthroned as Abbot on September 17, 2011.