Saint Mathurin of Larchant, also Mathurin of Sens, or Maturinus (died ca. 388)[1] was a fourth century Priest and Confessor who successfully enlightened his native region of Gâtinais, France,[note 1] and was gifted with wonderworking abilities as an exorcist. He is honoured as the apostle and patron of the historic French province of Gâtinais,[1] and his feast day is observed on November 1.

The first source to mention St. Mathurin is the Martyrology of Usuard,[2] written in 875 by a Benedictine monk of the Abbey of Saint-Germain-des-Prés in Paris.[note 2]

As soon as Saint Maturinus heard the Good News, his heart was entirely converted to Christ, and sold everything he owned to possess the pearl of great price. Mathurin was secretly baptized by Bishop Polycarp of Sens at the age of twelve, and eventually he converted his own parents.

His bishop respected him so much, that he gave Mathurin the government of the diocese when he had to leave for Rome. Mathurin then preached the Gospel to Gatinais with such success, that he converted the whole province to Christ.[1]

His fame grew to such an extent, that Emperor Maximian himself requested that Maturinus come to Rome so that his daughter-in-law Flavia Maximiana Theodora, who had been possessed by an evil spirit, could be cured by the saint. Mathurin thus went to Rome where he expelled the demon from Theodora’s body.

Mathurin lived for three more years in the Eternal City (Rome), interceding with the emperor on behalf of persecuted Christians.[2]

He died in peace some time before the year 388 and was buried in a Roman cemetery. However, Mathurin miraculously indicated that he wished to be buried in Larchant, and so his body was taken to Sens, and then back to Larchant, which became a pilgrimage site. 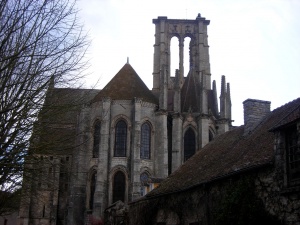 When the canons of Notre-Dame de Paris were put in possession of Larchant in 1004, they gained the Saints relics. They kept a part in Larchant and placed the other part in the chapel of Saint-Mathurin which they built in Paris in the Latin Quarter.[2]

In Larchant, a church was dedicated to him in 1153, which was carefully reconstructed by the canons of Notre-Dame de Paris. It was flooded with pilgrims and the sick for centuries, particularly at Pentecost.[3] Several kings of France including Louis XI, Francis I and Henry IV made ​​pilgrimages to Larchant.[2] Unfortunately, his shrine was burnt by the Huguenots (French Protestants) in 1568, and his relics were destroyed.[1]

Saint Mathurin was also commemorated by the Trinitarian friars in France , known as “Mathurins” because they were based in the Parisian church of Saint-Mathurin from 1228 onwards.[note 3]

Due to his deliverance of the girl with the evil spirit, Saint Mathurin is invoked against particular obsessions, madness, insanity, and as a protector of lunatics.[5] The faculty of medicine of the University of Paris kept their great seal in the Church of Saint-Mathurin.[6] By extension he also became the patron saint of comic actors, jesters, and clowns,[2] as well as the patron saint of sailors (in Brittany),[2] of tinmen (in Paris), and of plumbers.[5]