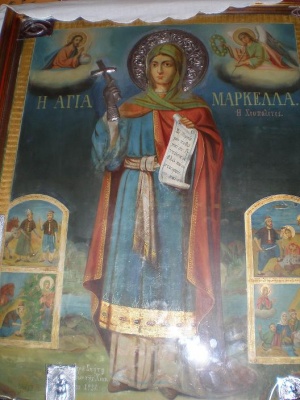 Markella was born and lived in the village of Volissos of Chios and lived during the fourteenth century. Her mother was a devout christian but her father was an idolater. At a young age, her mother passed away and Markella continued to study her bible, pray to God and live a life according to what she was taught.

Her father began to have sinful desires for Markella. By the time she had reached her eighteenth birthday, her father's desires had begun to show and his behaviour resulted in Markella leaving home. She went to a nearby mountain and hid in a bush. Her father found her, with the help of a local herdsmen, and they set fire to the bush to force her to show.

Her final moments were spent in prayer to Christ with a request that the rocks would open for her to hide from her father and this happened. Everything but her head was covered so when her father found her, he cut of her head and threw it into the sea. Her head floated to the nearby beach of Komi. For many years, the locals could not locate the head until one day an Italian Naval ship was in the area. In the evening, they could see a bright light coming from the distance and when they got closer they witnessed a head, floating in the water, lit by upright floating candles. Immediately, they realised that this was a sacred miracle they were witness to and they took the head of the Saint back to there homeland.

Final resting place of St. Markella
Shrine opposite the tomb