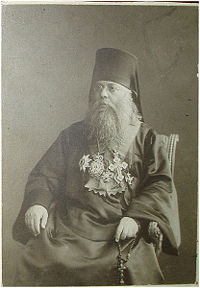 Archim. Leonid was also active, with other Georgians, in the struggle for restoration of autocephaly of the Church of Georgia during the early part of the twentieth century. After the 1917 February revolution in Russia, the Georgian synod proclaimed autocephaly on March 12, 1917 and elected Bishop Kirion II Catholicos-Patriarch of the restored church. In the restoration hierarchy, Archim. Leonid was consecrated a bishop and was appointed Bishop of Gori Imereti Guria-Samegrelo as well as Metropolitan of Tbilisi.