Difference between revisions of "Kyrill (Gundyayev) of Moscow" 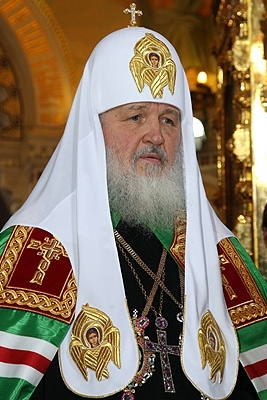 His Holiness Kyrill (Gundyayev) of Moscow (Кирилл), born as Vladimir Mikhailovich Gundyayev (Владимир Михайлович Гундяев), on November 20, 1946, Leningrad, Soviet Union, is the current Patriarch of Moscow and All Russia.

He took monastic vows April 3, 1969, and April 7 of the same year was ordained hierodeacon and June 1 - hieromonk.

In 1970 Kyrill completed a degree from the Leningrad Theological Academy, where he was retained as a professor of dogmatic theology and aid to the Academy's Inspector.

Since August 30, 1970, he was a personal secretary to Metropolitan Nikodim (Rotov), Metroplitan of Leningrad.

On September 12, 1971, he became archimandrite and was posted as a representative of the ROC to the World Council of Churches (WCC) in Geneva.

On December 26, 1974, he was appointed Rector of the Leningrad Academy and Seminary.

In December 1975, he was appointed a member of the WCC Central Committee and Executive Committee.

In 1974-1984 he was the Rector of the Leningrad Spiritual Academy and Seminary.

In 1971 he was appointed representative of the Moscow Patriarchate at the World Council of Churches and has been actively involved in the ecumenical activity of the Russian Orthodox Church since then. In 1978, Kyrill was appointed Deputy Chairman, and in November 1989, Chairman of the External Church Relations Department of the Moscow Patriarchate and permanent member of the Holy Synod. He is known as active and efficient diplomat.

On December 6, 2008, the day after the death of Patriarch Alexei II (1990-2008), the Holy Synod elected him Locum tenens of the Patriarchal throne.

On December 9, 2008, during the funeral service for Patriarch Alexei II in the Christ the Saviour Cathedral, which was broadcast live by Russia's state TV channels, he was seen and reported to have fainted at one point.[1]

On December 29, 2008, when talking to journalists, he said he was "categorically opposed to any reforms" of a liturgical or doctrinal nature in the Church.[2]

Since 1994 Kyrill has hosted a weekly Orthodox TV program on ORT/Channel One. Conservatives in the ROC criticized Kyrill for his ecumenical activities throughout the 1990s. However, in a recent statement Metropolitan Kyrill stated that there could be no doctrinal compromise with the Roman Catholic Church, and that discussions with them did not have the goal of seeking unification.[3]

On January 27, 2009, Kyrill was elected as Patriarch of Moscow, and was enthroned as the sixteenth Patriarch on Sunday February 1, 2009.

Some material from "Metropolitan Kirill of Smolensk" at Wikipedia