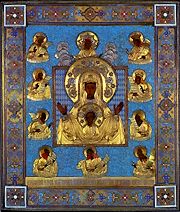 The Kursk Root Icon of the Mother of God of the Sign dates from the 13th century, and is one of the most ancient icons of the Russian Church. The icon is commemorated on September 8 and on November 27.

During the Tatar invasion in the thirteenth century, the city of Kursk was ravaged by the Horde of Batu and fell into desolation. After this, the residents of the city of Rylsk often journeyed to the site of Kursk to hunt wild beasts.

The icon itself depicts the Theotokos "of the Sign" with the Christ child before her. Her arms are outstretched. Above her is the "Lord of Hosts," and on either side and below are nine prophets who wrote about the birth of Christ (clockwise, starting in the top right): King Solomon, Prophets Daniel, Jeremiah, Elijah, Habakkuk, Judge Gideon, Prophets Isaiah, Moses, and King David. The wooden icon is covered with an intricately worked cover of blue and gold.

On September 8, 1259, a hunter noticed the icon lying on a root face downwards to the ground. The hunter lifted it and saw that the image of the icon was similar to the Novgorod "Znamenie" Icon of the Mother of God. Just as the hunter lifted up the holy icon from the earth, a strong spring of pure water surged up at that place where the icon rested.

With the help of friends the hunter rebuilt an old small chapel and placed the newly-found icon in it. When news of this spread, many came from Rylsk to this old chapel to venerate the icon and pray about their sorrows and needs. There the Mother of God healed all who came to her icon.

Soon after, the icon was transferred to Rylsk and put it in a new church in honor of the Nativity of the Theotokos. But the icon did not long remain there. It disappeared and returned to the place of its first appearance. The inhabitants of Rylsk repeatedly took it and carried it back to their city, but the icon incomprehensibly returned to its former place that is now on the grounds of the Kursk Root Hermitage. It was realized, that the Theotokos preferred the place of appearance of her icon.

This icon, and the help granted by the Mother of God, is linked with important events in Russian history: with the war of liberation of the Russian nation during the Polish-Lithuanian incursion in 1612, and the 1812 Fatherland war.

Several copies of the icon were made, which have also been associated with miracles.

Having obtained thee as an unassailable rampart and wellspring of miracles,
O Most Pure Mother of God, thy servants quell the assaults of enemies.
Wherefore, we pray to thee:
Grant peace to our land, and to our souls great mercy.

Come you faithful,
Let us radiantly celebrate the wondrous appearance of the most precious Image of the Mother of God,
And drawing grace there from, let us cry out with compunction:
Rejoice, O Mother of God, Blessed Mary, Mother of God!