Difference between revisions of "Joseph the Betrothed" 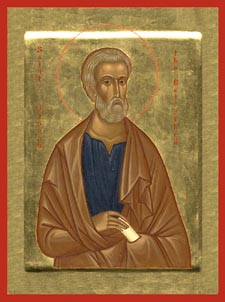 Courtesy of the Orthodox Church in America
St. Joseph the Betrothed, also referred to as Joseph of Nazareth, was the foster-father of Jesus Christ, according to the New Testament (Matthew 1:16; Luke 3:23). Not much is known of Joseph except that he was "of the House of David" and lived in the town of Nazareth. His date of death is unknown, though he was still living when Jesus was 12 years old.

He was betrothed to the Virgin Mary at the time that Mary conceived Jesus. Luke says that he lived at Nazareth in Galilee (Luke 2:4); however, according to Matthew, it was only after the return from Egypt that he settled in Nazareth (Matthew 2:23). He is called a "just man". He was by trade a carpenter (Matthew 13:55). He is last mentioned in connection with the journey to Jerusalem, when Jesus was twelve years old. It is probable that Joseph died before Jesus entered on his public ministry because only Mary was present at the marriage feast in Cana of Galilee, and he is not described at the crucifixion along with Mary (John 19:25). In addition Joseph of Arimathea asked for the body of Jesus, a duty that would have fallen to Saint Joseph had he been alive.

Jesus Christ is described as being the brother of James, Justus, Jude, and Simon, and several sisters (Mark 6:3; Matthew 13:55). A tradition at least as early as the second century, still adopted by Eastern Orthodoxy, explains that these "brothers and sisters" were from Joseph's marriage to Salome who left him a widower before he married Mary and so making them step-brothers and step-sisters.

In many icons of the Nativity, Joseph is shown being tempted by the Devil (depicted as an old man with furled wings) to break off his betrothal, and resisting that temptation.

Saint Joseph is commemorated on December 26, along with David the King and James the Brother of our Lord.