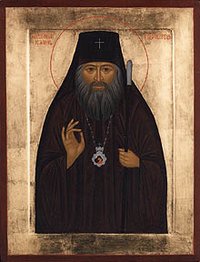 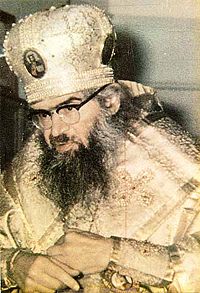 The future St. John was born on June 4, 1896, in the southern Russian village (current day Ukraine) of Adamovka in Kharkov province to pious aristocrats, Boris and Glafira Maximovitch. He was given the baptismal name of Michael, after the Holy Archangel Michael. In his youth, Michael was sickly and had a poor appetite, but he displayed an intense religious interest. He was educated at the Poltava Military School (1907-14), Kharkiv Imperial University, from which he received a law degree (in 1918), and the University of Belgrade (where he completed his theological education in 1925).

Hieromonk John was consecrated bishop on May 28, 1934, with Metr. Anthony serving as principal consecrator, after which he was assigned to the Diocese of Shanghai. Twelve years later he was named Archbishop of China. Upon his arrival in Shanghai, Bp. John began working to restore unity among the various Orthodox nationalities. In time, he worked to build a large cathedral church that was dedicated to Surety of Sinners Icon to the Mother of God, with a bell tower and large parish house. Additionally, he inspired many activities: the building churches, hospitals, and orphanages in Shanghai. He was intensely active, constantly praying and serving the daily cycle of services, while also visiting the sick with the Holy Gifts. He often would walk barefooted even in the coldest days. Yet to avoid the appearance of secular glory, he would pretend to act the fool. He gave generously to the needy and served the poor without a thought for his own needs.