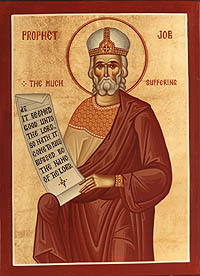 The Holy, and Righteous Job the Long-Suffering was a descendant of Esau, grandson of Abraham. His feast day is celebrated on May 6.

Job lived in Arabia almost 2000 years before Christ; his father's name was Zareth and his mother's name was Bosora. According to the Book of Job in the Old Testament, he lived in the land of Uz (whose location is unknown). He was an extremely wealthy man for his time and was declared to be the greatest man amongst the people of the East. As well, he was righteous, prosperous, and had a large family. Job suddenly lost his family and wealth, but maintained his integrity and focus on God, and was eventually rewarded with even greater prosperity than before. Job lived 248 years, long enough to see his great-grandchildren. 140 of his years came after his trials which began when he was 79.

"Job is considered the model of patient endurance of every suffering that God sends upon us, and a type of the suffering of the Lord Jesus." — Prologue of Ohrid

"The Book of Job is divided into five parts which consist of the prologue and epilogue written in prose form, and three middle parts expressed in the beauty of language that can be found only in poetry. The dramatic appeal of the life of Job goes beyond the principle of the triumph of good over evil, extending to a philosophy by which the religion of Jesus Christ's followers is enhanced, the simple philosophy which puts real meaning into the commonly quoted phrase 'Keep the faith.' In his many long hours of trial Job had no need to be reminded to keep the faith, but in keeping it he solidified it for all mankind, particularly for those masses of humanity who have had more than their share of suffering. He helps the more fortunate in counting out of their blessings." —[1]

Job is also mentioned in the Book of Ezekiel (14:14,20), along with Noah and Daniel, as among the most righteous men. The Book of Job is referred to in the Epistle to Hebrews 12:5, and in the First Epistle to the Corinthians 3:19.

Job, the Suffering Servant from the Prologue of Ohrid:

Tell me, brother, what you are able to endure,
And how much of a man you are, I will tell you.
Job the righteous rich man and all-glorious
By Satan, on a dunghill was thrown,
And with pus and sores covered,
To dogs and to men, a horrifying sight!
Whatever he had, in a day perished
Except faith and except patience.
But with the weapon of faith and patience,
Job, the horrible Satan overcame.
The uneven struggle, God looked on,
To the righteous one, victory He imparted.
With victory, all other riches,
And the envious devil shamed.