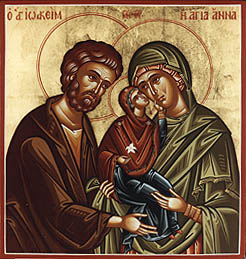 Sts. Joachim and Anna took Mary, at the age of two, to the temple to be dedicated to the service of the Lord, and presented her to the priest Zechariahs. The parents then, after offering up her sacrifice (according to the custom of the time), left the Virgin with other maidens in the apartments of the temple to be brought up therein. The Church commemorates the Presentation of the Theotokos on November 21.