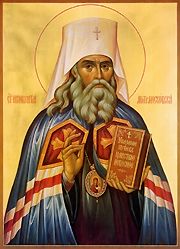 His travels over the islands greatly enhanced Father John Veniaminov's familiarity with the local dialects. In a short time he mastered six of the dialects. He devised an alphabet of Cyrillic letters for the most widespread dialect, the Unagan dialect of Aleut and, in 1828, translated the Holy Gospel of St. Matthew and other church materials into that dialect, which were eventually published in 1840 with the blessing of the Holy Synod of the Russian Orthodox Church. In 1829, he journeyed to the Bering Sea coast of the Alaskan mainland and preached to the people there. In 1836, his travels even extended to the south, to the Ross Colony north of San Francisco and to the Spanish missions of northern California. At Ross Colony he conducted services at its small, wooden chapel. 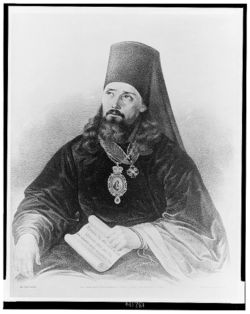 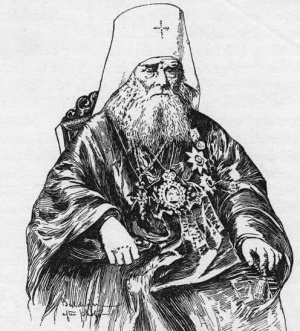 Apostle to the Aleuts
On December 15, 1840, Archimandrite Innocent Veniaminov was consecrated Bishop of Kamchatka and Kuril Islands in Russia and the Aleutian Islands in Russian America. His see was located in Novoarkhangelsk, which he returned to in September 1841. He spent the next nine years in the administration of his see as well as on several long missionary journeys to its remote areas. On April 21, 1850, Bishop lnnocent was elevated to Archbishop. In 1852, the Yakut area was admitted to the Kamchatka Diocese, and in September 1853, Archbishop Innocent took up permanent residence in the town of Yakutsk. Innocent took frequent trips throughout his enlarged diocese. He devoted much energy to the translation of the scriptures and service books into the Yakut (Sakha) language.