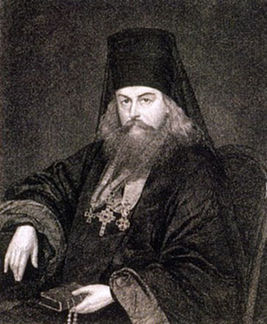 Our father among the saints Ignatius Brianchaninov (1807-1867), was a bishop of the Church of Russia and ascetical writer. His feast day is celebrated on April 30.

St. Ignatius Brianchaninov was born Dimitri Alexandrovich Brianchaninov (Дмитрий Александрович Брянчанинов), on the February 15, 1807, in the province of Vologda, the son of an aristocratic landowner. Intellectually gifted, peaceful and reflective by character, from early childhood he was drawn to a life of prayer and stillness. However, his father planned a military career for Dimitri, and so, when Dimitri was 15 years of age, his father enrolled him in the Imperial School of Military Engineers in St. Petersburg. There Dimitri excelled, even attracting the attention of Grand Duke Nicholas Pavlovich, the future Tsar Nicholas I. Nonetheless, Dimtri felt called to the monastic life (uncommon for a Russian aristocrat at that time), and he became deeply depressed at the seemingly inevitable prospect of a career as a military officer.

In 1826, Dimitri fell gravely ill, but nonetheless graduated first among all candidates at the School of Engineers and received his commission. Immediately, Dimitri attempted to resign this commission, but his resignation was refused on orders of Tsar Nicholas. However, in 1827, Dimtri became critically ill once more, and this time his resignation was accepted by the imperial authorities.

During the next four years, Dimitri lived as a novice in various monasteries, without settling permanently in any of them, partly because of ill health, and partly because he failed to find a spiritual father in whom he could place unreserved trust. For the remainder of his life, St. Ignatius would lament the scarcity of true spirit-bearing elders in his day. Finally, in 1831, Dimitri was professed monk by the ruling hierarch of his home province, Bishop Stephen of Vologda, and he received the monastic name of "Ignatius." Shortly after that Monk Ignatius was ordained deacon, then priest. All this took place without the approval of his parents. In 1832, Hieromonk Ignatius was appointed superior of a small monastery in the Vologda diocese. However, the damp climate brought about ill-health which quickly forced his resignation.

Then, in autumn of 1833, the most unexpected thing happened. Tsar Nicholas, during a trip to the School of Military Engineers in St. Petersburg, enquired into what had become of the promising student Dimitri Alexandrovich. Upon learning of his monastic profession and hieratic ordination, the tsar ordered Hieromonk Ignatius to return to the imperial capital, where, aged 26, he was raised to the rank of Archimandrite and made igumen of the St. Sergius Monastery, one of the most important in St. Petersburg, and one which enjoyed great imperial patronage. Tsar Nicholas entrusted Archimandrite Ignatius with the task of transforming this monastery into a model community, where visitors to the Imperial Court could see monasticism as it should be.

Over the next 24 years, and amid what was often taxing circumstances, Archimandrite Ignatius fulfilled his duties as igumen of the St. Sergius Monastery, giving particular attention to the beauty of the Liturgy. During this time he was a prolific author, writing much of the material in the five volumes of his collected works.

Finally, however, in 1857, and exhausted by his responsibilities as igumen, Archimandrite Ignatius was elevated to the episcopacy, to serve as Bishop of the Caucasus and Black Sea—a vast, unorganized diocese, whose administrative burdens were particularly difficult for someone afflicted with Bp. Ignatius' ill-health.

Thus, it was no surprise when, after four years of episcopal service, Bp. Ignatius submitted his resignation in 1861. The resignation was accepted, and Bp. Ignatius was allowed to retire to spend the remaining six years of his life in seclusion at the Nicolo-Babaevsky Monastery of the Kostroma diocese, where he devoted his time to writing and a wide correspondence with spiritual children. He reposed in the Lord on April 30, 1867.

Bp. Ignatius was glorified as a saint by the Russian Orthodox Church in 1988, and is commemorated on April 30.