According to Saint John of Damascus, from the last paragaph of the section, "On Heresies", in his THE FOUNT OF KNOWLEDGE:

There is nothing created, nothing of the first and second order, nothing of lord and servant;
but there is unity and trinity - there was, there is, and there shall be forever - which is perceived and adored by faith - by faith, not by inquiry, nor by searching out, nor by visible manifestation:
for the more He is sought out, the more He is unknown, and the more He is investigated, the more He is hidden.

And so, let the faithful adore God with a mind that is not overcurious.
And believe that He is God in three hypostases, although the manner in which He is so is beyond manner, for God is incomprehensible.
Do not ask how the Trinity is Trinity, for the Trinity is inscrutable.

But, if you are curious about God, first tell me of yourself and the things that pertain to you.
How does your soul have existence?
How is your mind set in motion?
How do you produce your mental concepts?
How is it that you are both mortal and immortal?
But, if you are ignorant of these things which are within you, then why do you not shudder at the thought of investigating the sublime things of heaven?

Think of the Father as a spring of life begetting the Son like a river and the Holy Spirit like a sea, for the spring and the river and the sea are all one nature.
Think of the Father as a root, and of the Son as a branch, and of the Spirit as a fruit, for the substance in these three is one.
The Father is a sun with the Son as rays and the Holy Spirit as heat.

Be persuaded, moreover, that the incarnate dispensation of the Son of God was begotten ineffably and without seed of the blessed Virgin, believing Him to be without confusion and without change both God and man, who for your sake worked all the dispensation.

And to Him by good works give worship and adoration, and venerate and revere the most holy Mother of God and ever-virgin Mary as true Mother of God, and all the saints as His attendants.

Doing thus, you will be a right worshiper of the holy and undivided Trinity, Father and Son and Holy Spirit, of the one Godhead, to whom be glory and honor and adoration forever and ever. Amen." 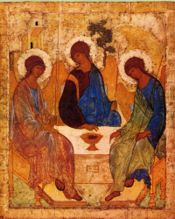