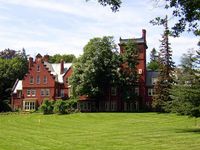 Holy Transfiguration Monastery is a men's monastery located in Brookline, Massachusetts, and is the principal monastery of the Holy Orthodox Church in North America (HOCNA).

The Elder Fr. Panteleimon, of Greek descent, became a monk on the Holy Mountain Athos at St. Pantelemon's Monastery. He later joined the New Skete, and with the blessing of the Saint Elder Joseph the Hesychast, moved to the Boston area and founded the Holy Transfiguration Monastery.

The monastery was founded in the winter of 1960 in Haverhill, Massachusetts. A modest house was acquired in early 1961 in Jamaica Plain. the house served well until numbers began to grow and more space was needed.

The current location of the Monastery is a 3-Story Mansion, built in 1881 in Brookline, Massachusetts. The adjoining coach house has been converted to cells to accommodate the growing number of monks. The Monastery property is mostly wooded, and is about 19 acres. Some land is set aside for the keeping of goats, which provide milk and cheese for the Fathers.

The Monastery follows a cenobitic, or community-style of living, having a population of around 35 monks, including 2 Bishops, 6 priestmonks, and 4 heirodeacons.