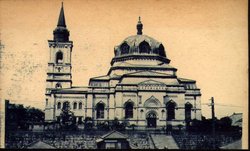 The original cathedral was seriously damaged in the Great Kanto Earthquake of September 1923. The earthquake caused the main bell tower to fall onto the central dome, collapsing it, and thus causing major damage to the building. Fire further damaged and destroyed the iconastasis and the interior of the building. Rebuilding the cathedral became a major task for the then ruling bishop, Archbishop Sergii (Tikhomirov), who succeeded St. Nicholas after he died in 1912. Since Russia could no longer be looked to as a source of funding, Archbishop Sergii had to look for funding within Japan. A significant amount of funds was raised by numerous concerts by the cathedral choir, led by Victor A. Pokrovsky. The re-built cathedral was re-consecrated on December 15, 1929, with a shorter bell tower, a modified dome that was more in keeping with Archbishop Nicholas' original desires, and a less ornate interior. The re-built cathedral was designed by the Japanese architect, Shinito Okada. 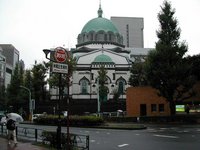