Difference between revisions of "Gregory V of Constantinople"

Our father among the saints Gregory V of Constantinople was the 234th Patriarch of Constantinople. He served as patriarch for three separate periods at the turn of the eighteenth and nineteenth centuries and was martyred during the Greek War of Independence. He was glorified as a saint by the Church of Greece in 1921 and is commemorated as an Ethnomartyr (Greek: Εθνομάρτυρας). He is remembered on April 10. 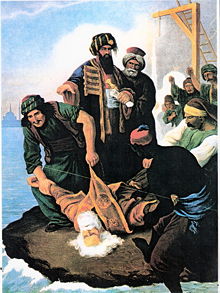 The hanging of Patriarch Gregory V from the gate of the Patriarchate on Easter Sunday April 10th, 1821. By Peter Von Hess.

Georgios Aggelopoulos was born in Dimitsana, Arcadia prefecture in 1746 to poor parents. A studious child, Georgios attended school at Dimitsana before continuing his education in Athens for two years. With the help of his uncle he continued his education in the theological school at Smyrna for another five years. Having been raised in the hesychastic environment around the Monastery of Philosophou he turned to a monastic life and was tonsured a monk in Strophades with the name Gregory. He continued his education in theology and philosophy at the School of Patmos.

After completing his education at Patmos, Gregory returned to Smyrna where he was ordained a deacon in 1775 by Metr. Procopius of Smyrna and subsequently became an archdeacon. Over the following years he was ordained a priest and a protosyncelos. In 1785, he was elected by the Patriarch of Constantinople to the position of Bishop of the Metropolis of Smyrna succeeding Procopius who had become Patriarch of Constantinople. In what was becoming a volatile political atmosphere, Gregory was elected to the patriarchal throne of Constantinople in May 1797. In a year he was deposed and deported to the Monastery of Iviron on Mount Athos where he lived an ascetic life of study. On September 23, 1806, the synod recalled him to the patriarchal see. With the shifting Turkish politics and the revolt of the Genitsars, Gregory’s second stint as patriarch ended in 1810 when he was expelled first to Pringiponisos, and then again to Mount Athos, where he stayed for nine years. On December 15, 1818, for the third time Gregory was called to the patriarchal see, this time at a crucial and tense time in the Greek struggle for independence.

In 1818, Gregory became a member of the Filiki Eteria (Friendly Society) that was preparing for a revolt against the Turkish rule. However, when Alexander Ypsilantis crossed the Prut River, starting the Greek revolt in Romania, Gregory felt it necessary to excommunicate him to protect the Greeks of Constantinople from reprisals by the Ottoman Turks. The reprisals did come during Holy Week in April 1921 after the Greeks revolted in the Peloponnesus. During celebration of the divine liturgy, with eight hierarchs, on the night of Pascha of April 10, Gregory was arrested and, by order of Sultan Mahmud II, hanged on the front gate of the Patriarchate compound in his full Patriarchal vestments. The gate has been closed, locked, and not used since. After hanging for three days and being mocked by the passing crowds, his body was taken down and given to a group of Jews who dragged it through the streets of Constantinople before throwing it into the Bosphorus.

Gregory’s body was recovered from the sea by a Greek seaman, Nicholas Sklavos, and secreted to Odessa, then in Southern Russia, where it was buried with honors at the Church of the Holy Trinity. Later his relics were enshrined in the Metropolitan Cathedral in Athens. His statue, along with that of Rigas Feraios, stands outside the University of Athens as great martyrs of the Greek Revolution.