Controversially, since the early 1990's, some within the Russian Orthodox Church have insisted that Rasputin was a saint, and lobbied for his formal canonization. [1] If accepted, he would properly be referred to as "Martyr for God and Tsar Elder Grigory Novy."

In 1901, Rasputin left his home as a pilgrim, journeying through Greece and on to Jerusalem. In 1903, he arrived in St Petersburg. There he developed a following as a "starets" among some of the aristocracy, including the Grand Duchesses Militza and Anastasia and Alexandra's companion Anna Vyrubova, with healing and prophetic powers before he returned to Siberia. By 1905, Tsarina Alexandra, who had been searching for help in controlling the hemophilia of the young Tsarevich Alexei, appealed for help from Rasputin through her trusted friend, Anna Vyruova. Rasputin was said to been able to eased the suffering of the Tsarevich in St Petersburg by prayers from Siberia. As each time Alexei suffered an injury, Rasputin's intervention at the request of Alexandra seemed to result in improvement for the young Tsarevich, giving the appearance that Rasputin was effectively healing him. Nicholas and Alexandra, thus, developed a trust in Rasputin, where the Tsar would often refer to Rasputin as "our friend" and as a "holy man."

Rasputin developed considerable personal and political influence over Alexandra. Nicholas and Alexandra considered Rasputin to be a man of God. Rasputin gained the position that anyone who desired an audience with the Tsar or Tsarina had to go through him, thus angering people who previously had freer access to the royal couple. Rasputin fascinated many of the St Petersburg elite. He was widely accepted by them. As World War I progressed, his influence over the royal couple increased. After Nicholas took personal command of the army along the fighting front, Rasputin became the chief advisor to the Tsarina Alexandra. Through his close relationship with her Rasputin was able to place many who were his friends in position within the government and in the Russian Orthodox Church. 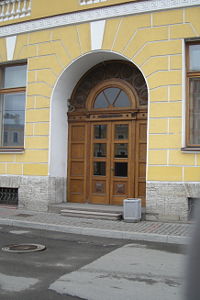