Difference between revisions of "Fyodor Dostoevsky" 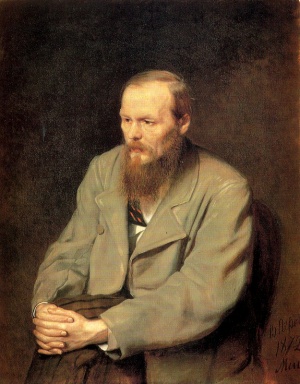 Portrait by Vasily Perov, 1872
Fyodor Mikhailovich Dostoevsky (Russian: Фёдор Миха́йлович Достое́вский, Fëdor Mihajlovič Dostoevskij, sometimes transliterated Dostoyevsky October 30/November 11, 1821 – January 28/February 9, 1881) is considered one of the greatest Russian writers, whose works have had a profound and lasting effect on twentieth-century fiction. His works often feature characters living in poor conditions with disparate and extreme states of mind, and exhibit both an uncanny grasp of human psychology as well as penetrating analyses of the political, social and spiritual states of Russia of his time. Many of his best-known works are prophetic precursors to modern-day thoughts. He is sometimes considered to be a founder of existentialism, most frequently for Notes from Underground, which has been described by Walter Kaufmann as "the best overture for existentialism ever written".

Dostoevsky was the second of seven children born to Mikhail and Maria Dostoevsky. (Origins from Polish Szlachta family Dostojewski CoA Radwan). Shortly after his mother died of tuberculosis in 1837, he and his brother Mikhail were sent to the Military Engineering Academy at St. Petersburg. In 1839 they lost their father, a retired military surgeon and a violent alcoholic, who served as a doctor at the Mariinsky Hospital for the Poor in Moscow. While not known for certain, it is believed that Mikhail Dostoevsky was murdered by his own serfs, who reportedly became enraged during one of Mikhail's drunken fits of violence, restrained him, and poured vodka into his mouth until he drowned. Another story was that Mikhail died of natural causes, and a neighboring landowner invented this story of a peasant rebellion so he could buy the estate inexpensively.

Dostoevsky was sent to the St. Petersburg Academy of Military Engineering and since he was not very good at mathematics, a subject he despised, he did not do very well. Instead, he focused on literature. His literary idol was Honoré de Balzac and in 1843 even translated one of Balzac's greatest works, Eugenie Grandet, into Russian. Dostoevsky started to write his own fiction around this time and in 1846, his first work, the epistolary short novel, Poor Folk, was met with great acclaim especially by the liberal critic Vissarion Belinsky with his famous exclamation, "A new Nikolai Gogol has arisen!" 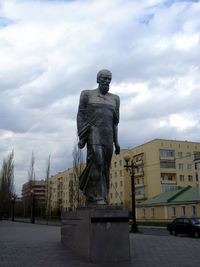 Monument to Dostoyevskiy in Omsk, his place of exile

Dostoevsky was arrested and imprisoned on April 23 1849 for engaging in revolutionary activity against Tsar Nicholas I of Russia. On November 16 that year he was sentenced to death for anti-government activities linked to a liberal intellectual group, the Petrashevsky Circle. After a mock execution in which he and other members of the group stood outside in freezing weather waiting to be shot by a firing squad, Dostoevsky's sentence was commuted to four years of exile performing hard labor at a katorga prison camp in Omsk, Siberia. His first recorded epileptic seizure happened in 1850 at the prison camp. It is said that he suffered from a rare form of temporal lobe epilepsy, sometimes referred to as "ecstatic epilepsy." It is also said that upon learning of his father's death before the elder could reply to a letter of criticism from Fydor, the younger Dostoevsky experienced his first seizure. Seizures then recurred sporadically throughout his life, and Dostoevsky's experiences are thought to form the basis for his description of Prince Myshkin's epilepsy in the The Idiot. He was released from prison in 1854, and was required to serve in the Siberian Regiment. Dostoevsky spent the following five years as a private (and later lieutenant) in the Regiment's Seventh Line Battalion stationed at the fortress of Semipalatinsk, now in Kazakhstan. While there, he began a relationship with Maria Dmitrievna Isaeva, the wife of an acquaintance in Siberia; they married in February 1857, after her husband's death.

Dostoevsky's experiences in prison and the army resulted in major changes in his political and religious convictions. He became disillusioned with 'Western' ideas, and began to pay greater tribute to traditional Russian values. Perhaps most significantly, he had what his biographer Joseph Frank describes as a conversion experience in prison, which greatly strengthened his Christian, and specifically Orthodox, faith (the experience is depicted by Dostoevsky in The Peasant Marey (1876)). In line with his new beliefs, Dostoevsky became a sharp critic of the Nihilist and Socialist movements of his day, and he dedicated his book The Possessed and his The Diary of a Writer to espousing conservatism and criticizing socialist ideas [1]. He later formed a peculiar friendship with the conservative statesman Konstantin Pobedonostsev.

In December 1859, he returned to St. Petersburg, where he ran a series of unsuccessful literary journals with his older brother Mikhail. Dostoevsky was devastated by his wife's death in 1864, followed shortly thereafter by his brother's death. He was financially crippled by business debts and the need to provide for his brother's widow and children. Dostoevsky sank into a deep depression, frequenting gambling parlors and accumulating massive losses at the tables.

Dostoevsky suffered from an acute gambling compulsion as well as from its consequences. By one account Crime and Punishment, possibly his best known novel, was completed in a mad hurry because Dostoevsky was in urgent need of an advance from his publisher. He had been left practically penniless after a gambling spree. Dostoevsky wrote The Gambler simultaneously in order to satisfy an agreement with his publisher Stellovsky who, if he did not receive a new work, would have claimed the copyrights to all of Dostoevsky's writing.

Motivated by the dual wish to escape his creditors at home and to visit the casinos abroad, Dostoevsky traveled to Western Europe. There, he attempted to rekindle a love affair with Apollinaria (Polina) Suslova, a young university student with whom he had had an affair several years prior, but she refused his marriage proposal. Dostoevsky was heartbroken, but soon met Anna Grigorevna, a twenty-year-old stenographer whom he married in 1867. This period resulted in the writing of his greatest books. From 1873 to 1881 he vindicated his earlier journalistic failures by publishing a monthly journal full of short stories, sketches, and articles on current events — the Writer's Diary. The journal was an enormous success. Dostoevsky is also known to have influenced and been influenced by famous Russian Philosopher Vladimir Sergeyevich Solovyov. Solovyov is noted as the inspiration for the character Alyosha Karamazov. [1]

In 1877 Dostoevsky gave the keynote eulogy at the funeral of his friend, the poet Nikolai Alekseevich Nekrasov, to much controversy. In 1880, shortly before he died, he gave his famous Aleksandr Pushkin speech at the unveiling of the Pushkin monument in Moscow.

In his later years, Fyodor Dostoevsky lived for a long time at the resort of Staraya Russa which was closer to St Petersburg and less expensive than German resorts. He died on January 28 (O.S.), 1881 of a lung hemorrhage associated with emphysema and an epileptic seizure and was interred in Tikhvin Cemetery at the Alexander Nevsky Monastery, St. Petersburg, Russia. Forty thousand mourning Russians attended his funeral.1 His tombstone reads "Verily, Verily, I say unto you, Except a corn of wheat fall into the ground and die, it abideth alone: but if it die, it bringeth forth much fruit." from John 12:24, which is also the epigraph of his final novel, The Brothers Karamazov. 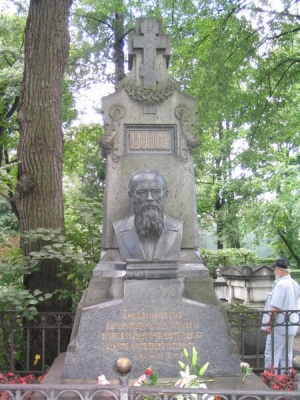 Essentially a writer of myth (and in this respect sometimes compared to Herman Melville), Dostoevsky displayed a nuanced understanding of human psychology evident in his major works. He created an opus of immense vitality and almost hypnotic power, characterized by the following traits: feverishly dramatized scenes (conclaves) where his characters are, frequently in scandalous and explosive atmosphere, passionately engaged in Socratic dialogues à la Russe; the quest for God, the problem of Evil and suffering of the innocents haunt the majority of his novels; characters fall into a few distinct categories: humble and self-effacing Christians (prince Myshkin, Sonya Marmeladova, Alyosha Karamazov), self-destructive nihilists (Svidrigailov, Smerdyakov, Stavrogin, the underground man), cynical debauchers (Fyodor Karamazov), rebellious intellectuals (Raskolnikov, Ivan Karamazov); also, his characters are driven by ideas rather than by ordinary biological or social imperatives.

Dostoevsky's novels are compressed in time (many cover only a few days) and this enables the author to get rid of one of the dominant traits of realist prose, the corrosion of human life in the process of the time flux — his characters primarily embody spiritual values, and these are, by definition, timeless. Other obsessive themes include suicide, wounded pride, collapsed family values, spiritual regeneration through suffering (the most important motif), rejection of the West and affirmation of Russian Orthodoxy and Tsarism. Literary scholars such as Bakhtin have characterized his work as 'polyphonic': unlike other novelists, Dostoevsky does not appear to aim for a 'single vision', and beyond simply describing situations from various angles, Dostoevsky engendered fully dramatic novels of ideas where conflicting views and characters are left to develop unevenly into unbearable crescendo.

By common critical consensus one among the handful of universal world authors, along with Dante Alighieri, William Shakespeare, Johann Wolfgang von Goethe, Miguel de Cervantes, Victor Hugo and a few others, Dostoevsky has decisively influenced twentieth century literature, existentialism and expressionism in particular.

Many Orthodox readers prefer the translations of Richard Pevear and Larissa Volokhonsky because of their attention to Orthodox liturgical terminology.

Articles and Books on Dostoevsky and Orthodox Christianity