Difference between revisions of "Fourth Crusade"

The Fourth Crusade lasted from 1201-1204. Though the Crusades were for the most part an entirely Western phenomenon, this one affected Eastern Church history because the invading Crusaders took Constantinople on April 13, 1204. After defeating the Byzantine Emperor Alexius V (who had usurped the throne from his predecessor Alexius IV, put in power by the Crusaders), they conquered the city and famously looted and desecrated numerous churches, icons, and relics.1 They then set up the Latin Empire, based in Constantinople; it lasted over 57 years until the Byzantine Michael VIII Palaeologus recaptured Constantinople in 1261. This Crusade is widely regarded as having finalized the Great Schism, as much bitterness towards the West remained even after the restoration of Byzantium.

Factors Contributing to the Diversion of the Fourth Crusade

1. Papal primacy as developed during the Cluniac Reformation (10th-11th c.) and the Gregorian Reform of Pope Gregory VII.

The Monastery of Cluny in French Burgundy taught the high doctrine of the power of the Apostolic See. The Church was to be organized under strict discipline, and bishops, priests, and monks had no rights of their own that were not derived from the pope, the unique source of ecclesiastical authority. In 1039 Cluny's abbot Odilo turned his monastery into the head of a monastic feudal system whose influence spread all over Europe. In 1055 the Monastery of Cluny captured the papacy. Pope Innocent III (pope during the Fourth Crusade) carried these Cluniac ideas about the position of the pope as the sole and highest authority in the Church.

It naturally followed, therefore, that Pope Gregory VII (1073-85) conceived of his supremacy over the temporal powers as a domination over both the Eastern and Western Empires. This Gregorian Reform stressed, among other things, the primacy of the papacy over the Empire, the infallability of the Church, and the right of popes to depose emperors.

With this background, and with the experience of the Great Schism in 1054, the papacy's position was that Byzantium was regarded as a rebel, a schismatic or heretical nation which should be brought back to order or eliminated.

2. Resentment the West had long felt against Eastern Christendom

The average European, especially those who lived in the northern territories and had no communication or knowledge of the Byzantine Empire, were taught to believe that the Greeks were ungodly, a nation not worthy to bear the name of Christians. Two examples are:

3. Byzantium was regarded by the average Crusader as a traitor to Christendom in that it had consistently been hindering the Crusades, which were viewed by Crusaders as the liberation of the Holy Places from the infidel.

The fact is that Constantinople was always suspicious of these Western hordes, sometimes quite unruly, which were passing through its territory full of bigotry and fanaticism against the Islamic nations neighboring the Empire. Besides, the policy of the Byzantine Empire in handling the Moslems and keeping them away was quite opposite to the Crusaders' ideals and blind religious fanaticism. Historian Queller, quoting Runciman, says that "the concept of Christian War appears to be alien to the thought and personality of Jesus, and in fact, it was not looked upon favorably by the Greek Church."

4. Commercial Rivalries: Venice had the goal of controlling the very important parts of the Empire for the benefit of her trade.

Envy for the apparent wealth of the Greeks and perhaps the desire to share in some of the precious holy relics and treasure in the churches of the imperial capital was another motivation. The primary sources of the First Crusade speak of the awe the Crusaders felt when they first glanced at the Imperial City and the domes of Hagia Sophia; the feeling of inferiority is openly discerned as being at work in the Crusaders as a result.

More to the point, in both of the accounts of Villehardouin and that of the Crusader knight Robert of Clari (4th Crusade), the impression of the Crusaders is recorded. They were stunned by the unbelievable wealth and the treasure of the holy relics of Constantinople.

Nov. 1198 - The popular preacher Fulk of Neuilly is commissioned by Pope Innocent III to preach the crusade.

28 Nov. 1199 - At the tournament in Ecry, many young counts take the cross: Thibald of Champagne (leader), Louis of Blois, Simon de Montfort, Reynald of Montmirail, etc.

23 Feb. 1200 - Baldwin of Flanders takes the cross. - shortly thereafter - at a meeting in Soissons, it was decided to delay the Crusade due to lack of support (manpower). - 2 months later - at Compiegne - it was decided to take the sea route to the East. A group of 6 envoys were sent to Venice to negotiate this. Geoffroy de Villehardouin (author of "Chronicles of the Crusades") was one of these.

June 1201 - at Soissons, Boniface of Montferrat takes the cross and is made leader of the Crusade.

(Possibility of Phillip of Swabia, Alexius IV, and Boniface of Montferrat discussing a change in direction for the Crusade = diversion of the Fourth Crusade).

After 10 Nov. 1202 - a letter of Pope Innocent III forbids the Crusaders to attack any Christian city, and he names Zara by name, since the king of that city had also taken the cross.

After 24 Nov.1202 - The pope excomminicates the Crusaders, but shortly thereafter absolves them all (except the Venetians), in order to prevent the breakup of the Crusade.

Dec. 1202 - Envoys of Phillip of Swabia arrive in Zara and present the proposal of Alexius IV to the Crusade leaders -- for them to restore Alexius to the throne in exchange for a list of hefty concessions.

24 May 1203 - The Crusaders depart from Corfu after having ratified the proposal of Alexius IV, in Alexius' presence, by oath. Alexius accompanies the Crusaders from here on.

24 June 1203 - Arrival before the walls of Constantinople.

18 June 1203 - FIRST SEIGE of Constantinople. The city falls. First fire in the city. Alexius III flees, and then Alexius IV and Isaac are crowned co-emperors.

August 1203 - Delays in payment by Alexius IV to the Crusaders detain them in Constantinople. They end up wintering in the city instead of leaving for Egypt.

16 May, 1204 - Baldwin of Flanders is crowned the first Latin emperor of the new "Latin Empire of Constantinople (Romania)."

Speros Vryonis in Byzantium and Europe gives a vivid account of the sack of Constantinople by the Frankish and Venetian Crusaders of the Fourth Crusade:

"The Latin soldiery subjected the greatest city in Europe to an indescribable sack. For three days they murdered, raped, looted and destroyed on a scale which even the ancient Vandals and Goths would have found unbelievable. Constantinople had become a veritable museum of ancient and Byzantine art, an emporium of such incredible wealth that the Latins were astounded at the riches they found. Though the Venetians had an appreciation for the art which they discovered (they were themselves semi-Byzantines) and saved much of it, the French and others destroyed indiscriminately, halting to refresh themselves with wine, violation of nuns, and murder of Orthodox clerics. The Crusaders vented their hatred for the Greeks most spectacularly in the desecration of the greatest Church in Christendom. They smashed the silver iconostasis, the icons and the holy books of Hagia Sophia, and seated upon the patriarchal throne a whore who sang coarse songs as they drank wine from the Church's holy vessels. The estrangement of East and West, which had proceeded over the centuries, culminated in the horrible massacre that accompanied the conquest of Constantinople. The Greeks were convinced that even the Turks, had they taken the city, would not have been as cruel as the Latin Christians. The defeat of Byzantium, already in a state of decline, accelerated political degeneration so that the Byzantines eventually became an easy prey to the Turks. The Crusading movement thus resulted, ultimately, in the victory of Islam, a result which was of course the exact opposite of its original intention." (Vryonis, Byzantium and Europe, p.152).

Sir Edward Gibbon stated that the spoils taken during one week in Constantinople equalled seven times the whole revenue of England at that time (Treece). The four magnificent bronze horses over the portals of San Marco's Basilica in Venice were snatched from the Byzantine hippodrome, standing monuments of one of the greatest acts of brigandage in history.

Its hard to exaggerate the harm done to European civilization by the sack of Constantinople. The treasures of the city, the books and works of art preserved from distant centuries, were all dispersed and most destroyed. The Empire, the great Eastern bulwark of Christendom, was broken as a power. The conquests of the Ottomans were made possible by the Crusaders' crime(Runciman, p.46).

A Roman Catholic patriarch was established and attempted to introduce Roman Catholicism by force. The new Venetian Patriarch in Constantinople, Tommaso Morosini, was appointed by the Doge of Venice, Enrico Dandolo (the main person who engineered the diversion of the Fourth Crusade); and according to Gibbon, the Venetians employed every art to perpetuate in their own nation the honors and benefices of the Greek church. Morosini appealed to the Pope for aid, and being unable to serve so many derisive masters, he died a madman. The new papal legate, Pelagius, rode into Constantinople dressed in scarlet from head to foot, like a Greek Emperor himself, and soon asserted that the easy days were over: Thenceforth the Greek clergy must adapt themselves in all religious rites and beliefs to those of the Church of Rome. He was prepared to wade through blood, he quickly showed, should the Orthodox Greeks deny any part of his assertion (Treece, pp.230-231). 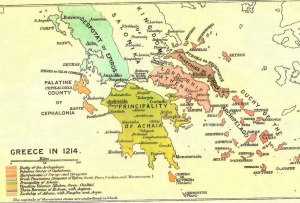 After the Battle of the Olive Grove of Koundouros, which took place in the spring of 1205, in Messinia, Peloponnese, between the Franks and the Greeks, all the castles and cities of the Peloponnese fell to the Franks. Meanwhile, the Venetians took possession of Crete in 1211, and retained it until ousted by the Ottoman Turks in 1669, a full 458 years later. 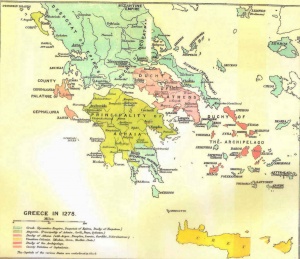 Greece in 1278
In September of 1259, the Byzantines defeated the Latin Principality of Achaea at the Battle of Pelagonia, marking the beginning of the Byzantine recovery of Greece.

In 1261 Emperor Michael Palaeologus reconquered Constantinople for the Byzantines, and control of the city at last passed from the Venetians to the Paleologus Dynasty. Emperor Michael VIII Palaeologus made the city of Mystras in the Peloponnese the seat of the new Despotate of Morea, which was to last until 1460.

The papal visit to Athens, Greece was the first in nearly 1300 Years. Pope John Paul II and Archbishop Christodoulos met at the Aereopagus Hill, where the Apostle Paul preached to Athenians 2000 years ago.

Pope John Paul II stated: "For occassions past and present when the sons and daughters of the Catholic Church have sinned by actions and omission against their Orthodox brothers and sisters, may the Lord grant us the forgiveness we beg of Him." Many Orthodox regard this as a 'political' apology for the sacking of Constantinople in 1204, as well as for other issues, but it was clearly not in any way or form a 'religious/doctrinal' apology on the part of the Roman Catholic Church.