Difference between revisions of "Fall of Constantinople" 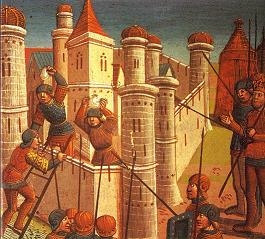 The Fall of Constantinople was the conquest of that Roman city by the Ottoman Empire under the command of Sultan Mehmet II, on Tuesday, May 29, 1453. This event marked the final destruction of the Eastern Roman ("Byzantine") Empire, and the death of the last Roman Emperor, Constantine XI.

State of the Empire

In the 1,123 years of Constantinople's existence, the city had been besieged many times, but had only been captured once, during the Fourth Crusade in 1204. The Crusaders, however, had not originally set out to conquer the entirety of the empire, and the Romans re-established themselves in the city in 1261. In the following two centuries, the greatly weakened empire was gradually taken apart piece by piece by a new threat, the Ottoman Empire. In 1453, the "empire" consisted of little more than the city of Constantinople and a portion of the Peloponnese (centered on the fortress of Mystras). The Empire of Trebizond, a completely independent successor state formed in the aftermath of the Fourth Crusade, also survived on the coast of the Black Sea.

Mehmet II, whose great-grandfather Bayezid I had previously built a fortress on the Asian side of the Bosphorus called Anadolu Hisarı, now built a second castle outside the walls of Constantinople on the European side called Rumelihisarı. Its purpose was to increase Turkish influence on the straits, and to prevent assistance from Genoese colonies on the coast from reaching the city in the event of a siege. Meanwhile, Constantine XI tried to buy him off with gifts. However, the closing of the small mosques within the city by the emperor, and the pressure on Greek Muslims to convert back to Christianity formed the pretext for Mehmet to declare war.

Constantine appealed to Western Europe for help, but Pope Nicholas V was unwilling to support the city. Ever since the mutual excommunication of the Orthodox and Roman Catholic churches in 1054, the Roman Catholic West had been trying to re-integrate the East; the West now used this as a negotiating tactic, promising to send help if the "Byzantines" brought their church back into communion with Rome. Attempts had been made to do this after the Council of Florence and the Council of Basel, but the Orthodox population refused to support it. Ultimately, Pope Nicholas and many other Western leaders made the decision not to support the Empire in its greatest time of need, although some troops did arrive from the city states of northern Italy to lend their support.

The Roman garrison totaled about 7,000 men, 2,000 of whom were foreign mercenaries. The city also had fourteen miles of walls - the strongest set of fortified walls in existence at the time. The Ottomans, on the other hand, had a much larger force, numbering around 100,000, including 20,000 Janissaries, the elite bodyguard of the Ottoman Emperor himself. Mehmet also built a fleet to besiege the city from the sea.

The Ottomans employed a Hungarian engineer named Urban, who was a specialist in the construction of cannons, which were still relatively new weapons at the time. In addition to building a number of cannons for the siege, he also built an enormous cannon which he claimed "could blast the walls of Babylon itself." The cannon, dubbed "the Basilic", was nearly twenty-seven feet in length and 2.5 feet in diameter, and could fire a 1200 lb. ball as far as one mile. Fortunately for the city however, Urban's cannon had several drawbacks. It was greatly inaccurate, took three hours to reload, and its ammunition was in very short supply. After six weeks of bombarding the city, the cannon collapsed under the force of its own recoil, killing Urban and his crew.

Mehmet planned to attack the Theodosian Walls, the intricate series of walls and ditches protecting Constantinople from an attack from the west, as it was the only part of the city not surrounded by water. His army encamped outside the city on Bright Monday, April 2, 1453. For weeks, Mehmet's massive cannon fired on the walls, but it was unable to sufficiently penetrate them, and due to the enormous amount of time it took to reload the gun, the Romans were able to repair most of the damage after each shot. Meanwhile, Mehmet's fleet could not enter the Golden Horn due to the large chain the Romans had laid across the entrance. To circumvent this, he built a road of greased logs across Galata on the northern side of the Golden Horn, and rolled his ships across. This succeeded in stopping the flow of supplies from Genoan ships and demoralizing the Roman defenders, but it did not give the Ottomans access to the city.

On the morning of May 29, the assault began. The first wave of attackers, the bashi-bazouks (poorly trained and equipped Ottoman infantry) were sent in first to soften the defenders. The second wave, consisting largely of Anatolians, focused on a section of the Blachernae walls in the northwest part of the city, which had been partially damaged by the cannon. This section of the wall had been built much more recently (in the 11th Century) and was much weaker; the Crusaders in 1204 had broken through the walls there. The Ottoman attackers also managed to break through, but were pushed back out by the Roman defenders. The Romans also managed to hold off a third attack by the Sultan's elite Janissaries, but the Genoan general in charge of the defense, Giovanni Giustiniani, was wounded in the attack, and the defenders began to panic.

Unfortunately for the Romans, the Kerkoporta gate in the Blachernae section of the wall had been left unlocked, and the Ottomans soon discovered this mistake. With the Ottomans now pouring in, Constantine XI, the last of the Roman emperors, said, "The city is fallen and I am still alive." Tearing off his imperial ornaments so as to let nothing distinguish him from the soldiers who fought bravely by his side, he led his troops in a final charge against the invaders. The emperor was never seen alive again, and the Ottomans were unable to locate his body in the aftermath of the siege.

Although Mehmet II initially intended to allow the traditional three days of rape, pillage and looting of the city (as was the custom of virtually all victorious sieges in that era), he changed his mind after seeing the great structures of the city being destroyed, and stopped the activities after 24 hours. Unfortunately, even though only a day had passed, the vast majority of the populace was either raped, despoiled, or enslaved by that time. Of the estimated 50,000 persons residing in the city, only half were still free when Mehmet issued his order to cease the carnage. Luckily however, valuable Christian treasures were later returned to the Church intact, such as the precious Gifts of the Three Magi. After the city was secured and under control, Mehmet entered the city in a ceremonial procession where the local population brought him flowers in congratulations.

In Mehmet's view, he was the successor to the Roman Emperor, and Constantinople became the new capital of the Ottoman Empire. Allthough the Hagia Sophia was converted into a mosque, the Church of Constantinople remained intact, and Gennadius Scholarius was appointed Patriarch. The Peloponnesian fortress of Mystras held out until 1460, and the Empire of Trebizond fell a year later.

Many Greeks fled the city and found refuge in Italy, bringing with them many ancient Greek writings that had been lost in the West, thus giving spark to the Renaissance. Those Greeks who stayed behind were mostly confined to the Phanar and Galata districts. The Phanariots, as they were called, often provided capable advisers to the Ottoman sultans, but were often seen as traitors by the other Greeks. The city still remains under Turkish control today, and many Greeks consider Tuesday (the day of the week that Constantinople fell) to be the unluckiest day of the week.