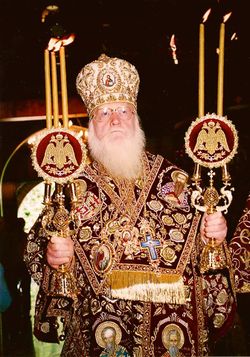 Klaus Augustin Hessler was born in 1935 in Germany. He studied philosophy, then Theology in Rome.

He was tonsured rasophore monk in 1970 than lector, subdeacon - later in 1971 was ordained deacon and in 1971 priest as Hieromonk by Metropolitan Antony (Bloom) in the Moscow Patriarchate.

He was sent to Italy to organize the religious and pastoral life of the parishes of the Moscow Patriarchate of Milan, Bologna, Lugano, Bergamo, Genova, Pavia Brescia e Modena.

On 9 September 1984, he became a bishop for the Greek Orthodox Church of the Old Calendar (Headed by Archbishop Auxentios of Athens) October 19th Archbishop of Milan.

On 28 September 1990 he was elected as the new Primate of the Autonomous Orthodox Church in Western Europe, now Holy Synod of Milan.