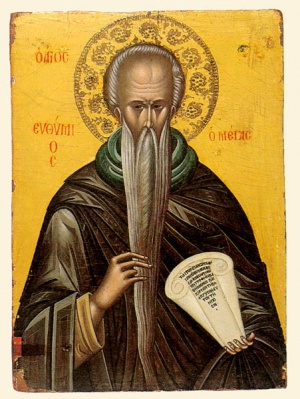 St. Euthymius the great: 17th c. painting on wood at Dionysiou Monastery, Mt. Athos
Our great and venerable father Euthymius (sometimes spelled Euthymios or Efthymios) was a monastic who lived in the latter fourth and the fifth centuries. The Church celebrates his feastday January 20.

Euthymius was born during the reign of king Gratian in 377 A.D. He came from Melitine in Armenia (now Makatya, Turkey), and was the son of pious and faithful parents called Paul and Dionysia.

Though Euthymius' mother was barren, his parents prayed fervently to God to grant them a child. Then they had a vision: they heard the voice of an angel who told them to be cheerful because with the child's birth every heresy was going to be abolished and universal peace was going to be granted to the Church of God. For this reason this saint was called Euthymius (meaning good cheer).

When the saint's father died, his mother offered him to Eutrojos, bishop of Melitine, by whom he was counted with the order of clerics. Because he was intelligent in his studies and surpassed all men in virtue and asceticism, he was forced to be ordained a priest and to look after the holy hermitages and monasteries. When he was twenty-nine years old, he went to Jerusalem and lived with St. Theoktistos in a cave on the mountain. While he was there, St. Euthymius liberated many men from the terrible chains of disease.

They also say that this saint fed four hundred men, who had come to the monastery, with very few loaves of bread. Moreover, not only did he break his mother's sterility through his birth, but also through prayer he made other childless women to be fruitful. He also opened the gates of Heaven, as great Elijah had done, bringing rain during a period of drought. Once a column of light, seen descending from Heaven by the by-standers while the saint was celebrating the bloodless sacrifice, made the internal brightness of divine Euthymius' soul known. This light shone over the saint until he completed the Liturgy. A further sign of the purity and chastity of the saint was that he could spiritually see the mood and the condition of those souls when they approached to receive the Eucharist.

Another story about St. Euthymius' clairvoyance involves a monk who was about to die. This monk outwardly appeared to be a prudent and moderate saint, but in his heart he was lecherous and intemperate because he allowed his labors to be sweetened with shameful thoughts. So, when this monk at the point of death, blessed Euthymius saw an angel taking the soul of that miserable monk by force, using a three-pronged spear. Immediately the saint also heard a voice revealing all the hidden and shameful thoughts of that dying monk.

When Euthymius was ninety-six years old (in A.D. 473), he departed to the Lord. He had established religious communities throughout Palestine.

Rejoice, O barren wilderness!
And be glad, sterile desert, that has never known the travail of birth!
The man of desires has multiplied your sons;
He has planted them in faith and piety.
He has watered them with the Holy Spirit:
They grow in self-denial and perfect virtue.
Through His intercessions, O Christ God, preserve Your people in peace!

The wilderness rejoiced at your birth, holy father Euthymius.
In your memory, it brings a harvest of joy through your many miracles.
Pour these wonders on our souls as well and cleanse us from our sins,
That we may sing: Alleluia!