Difference between revisions of "Eucharist" 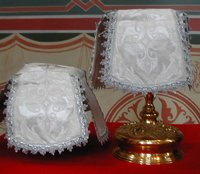 Eucharist (from the Greek εὐχαριστία, or eucharistia, meaning thanksgiving or giving thanks) is a holy mystery (or sacrament) that is celebrated during the Divine Liturgy within the Orthodox Church where the consecrated bread and wine, through the power of the Holy Spirit becomes the Precious Blood and Body of Jesus Christ, that is consumed by prepared Orthodox Christians. Other names for the Eucharist include: the Holy Gifts, Communion, and the Body and Blood of our Lord Jesus Christ Orthodox Christians believe that the Real Presence of God (not merely a sign) is present after the consecration of the Gifts. Roman Catholics and some protestants also hold this view.

The majority of scholars of the Last Supper do not believe that it was a Passover meal, a position consistent with the account given by the Gospel of Saint John. A minority believe that it was a seder or Passover meal, a position consistent with the Synoptic gospels. However, as Enrico Mazza has argued, the minority view "remains a theological interpretation. The historical fact is that the Last Supper was not a Passover celebration and, consequently, that its liturgy was not that of the Jewish Passover" (The Celebration of the Eucharist: The Origin of the Rite and the Development of Its Interpretation [Collegeville, MN: Liturgical Press, 1999] pp. 25-26).

The Orthodox Church uses leavened bread for, according to the Gospel of Saint John, Last Supper and Passion, took place during the evening, night and day time of Passover Day, therefore leavened bread was eaten in Last Supper. According to the synoptic Gospels, last Supper, Lord's trial and crucifixion took place during next day, the first Day of Unleavened Bread feast, but according to Lev 23:7, any work on that Day was forbidden. Clearly, the synoptic Gospels are in error on the day of Last Supper and Passion.

The reserved gifts are normally prepared at the Vesperal Liturgy of Holy Thursday or when the need arises. A detailed description of this can be found in the addendum of the clergy service book. For an illustrated description online see [1].

Used by the Western-rite Orthodox of the Antiochian church.

This liturgy is also known as the Sarum Rite; it is used by the Antiochian and ROCOR Western-rite churches.

The Divine Liturgy according to St Germanus of Paris is a restoration of the Gallican liturgy as celebrated in Paris in the sixth century. It is authorized for use by some parishes of the Church of Romania in France.