The Ethiopian Orthodox Tewahedo Church (in Amharic: Yäityop'ya ortodoks täwahedo bétäkrestyan) is an Oriental Orthodox church in Ethiopia that was part of the Coptic Church until 1959, when it was granted its own Patriarch by Coptic Pope Cyril VI. The only pre-colonial Christian church of Sub-Saharan Africa, it claims a membership of close to 36 million people worldwide, and is thus the largest of all Oriental Orthodox churches. The current Head is His Holiness Abune Paulos (born 1935, elected 1992), Patriarch of Addis Ababa.

Tewahedo (Ge'ez tawāhidō, modern pronunciation tewāhidō) is a Ge'ez word meaning "being made one"; it is related to the Arabic word توحيد tawhid, meaning "monotheism," or more literally "unification." This refers to the Oriental Orthodox belief in the one single unique Nature of Christ (i.e., a belief that a complete, natural union of the Divine and Human Natures into One is self-evident in order to accomplish the divine salvation of humankind), as opposed to the "two Natures of Christ" belief (unmixed, separated Divine and Human Natures, called the Hypostatic Union) promoted by today's Roman Catholic and Eastern Orthodox churches. According to the Catholic Encyclopedia article on the Henoticon [1]: the Patriarchs of Alexandria, Antioch, and Jerusalem, and many others, all refused to accept the "two natures" doctrine decreed by the Byzantine Emperor Marcian's Council of Chalcedon in 451, thus separating them from the Roman Catholic and Eastern Orthodox, who themselves separated from one another later in the Great Schism (1054). The Oriental Orthodox Churches, which today include the Coptic Orthodox Church, the Armenian Apostolic Church, the Syriac Orthodox Church, the Malankara Orthodox Church of India, the Ethiopian Orthodox Church, and the Eritrean Orthodox Tewahedo Church, are referred to as "Non-Chalcedonian", and, sometimes by outsiders as "monophysite" (meaning "One Nature", in reference to Christ; a rough translation of the name Tewahido). However, these Churches themselves describe their Christology as miaphysite.

The Ethiopian Church claims its origins from Philip the Evangelist (Acts 8). It became the established church of the Ethiopian Axumite Kingdom under king Ezana in the 4th century through the efforts of a Syrian Greek named Frumentius, known in Ethiopia as Abba Selama, Kesaté Birhan ("Father of Peace, Revealer of Light"). As a boy, Frumentius had been shipwrecked with his brother Aedesius on the Eritrean coast. The brothers managed to be brought to the royal court, where they rose to positions of influence and converted Emperor Ezana to Christianity, causing him to be baptized. Ezana sent Frumentius to Alexandria to ask the Patriarch, St. Athanasius, to appoint a bishop for Ethiopia. Athanasius appointed Frumentius himself, who returned to Ethiopia as Bishop with the name of Abune Selama. For centuries afterward, the Coptic Patriarch of Alexandria always named a Copt (an Egyptian) to be Abuna or Archbishop of the Ethiopian Church.

Little else is known of church history down to the period of Jesuit influence, which broke the connection with Egypt. Union with the Coptic Church continued after the Arab conquest in Egypt.

Abu Saleh records in the 12th century that the patriarch always sent letters twice a year to the kings of Abyssinia (Ethiopia) and Nubia, until Al Hakim stopped the practice. Cyril, 67th patriarch, sent Severus as bishop, with orders to put down polygamy and to enforce observance of canonical consecration for all churches. These examples show the close relations of the two churches concurrent with the Middle Ages. But early in the 16th century the church was brought under the influence of a Portuguese mission.

In 1439, in the reign of Zara Yaqob, a religious discussion between Abba Giorgis and a French visitor had led to the dispatch of an embassy from Ethiopia to the Vatican; but the initiative in the Roman Catholic missions to Ethiopia was taken, not by Rome, but by Portugal, as an incident in the struggle with the Muslim Ottoman Empire and Sultanate of Adal for the command of the trade route to India by the Red Sea.

In 1507 Matthew, or Matheus, an Armenian, had been sent as Ethiopian envoy to Portugal to ask aid against Adal. In 1520 an embassy under Dom Rodrigo de Lima landed in Ethiopia (by which time Adal had been remobilized under Ahmad ibn Ibrihim al-Ghazi). An interesting account of the Portuguese mission, which remained for several years, was written by Francisco Alvarez, the chaplain.

Later, Ignatius Loyola wished to essay the task of conversion, but was forbidden. Instead, the pope sent out Joao Nunez Barreto as patriarch of the East Indies, with Andre de Oviedo as bishop; and from Goa envoys went to Ethiopia, followed by Oviedo himself, to secure the king's adherence to Rome. After repeated failures some measure of success was achieved under Emperor Sissinios, but not until 1624 did the Emperor make formal submission to the pope. Sissinios made Roman Catholicism the official state religion but was met with heavy resistance by his subjects and eventually had to abdicate in 1632 to his son, Fasilides, who promptly returned the state religion to Ethiopian Orthodox Christianity. He then expelled the Jesuits in 1633, and in 1665, Fasilides ordered that all Jesuit books (the Books of the Franks) be burned.

The Coptic and Ethiopian Churches reached an agreement on July 13, 1948, that led to autocephaly for the Ethiopian Church. Five bishops were immediately consecrated by the Coptic Patriarch of Alexandria, empowered to elect a new Patriarch for their church, and the successor to Abuna Qerellos IV would have the power to consecrate new bishops. This promotion was completed when Coptic Pope Yosab of Alexandria consecrated an Ethiopian-born Archbishop, Abuna Baslios, on January 14, 1951. Then in 1959, Pope Cyril VI of Alexandria crowned Abuna Baslios as the first Patriarch of Ethiopia.

Patriarch Abune Baslios died in 1971, and was succeeded that year by Patriarch Abune Tewophilos. With the fall of Emperor Haile Selassie in 1974, the Ethiopian Orthodox Tewahido Church was disestablished as the state church. The new Marxist government began nationalizing property (including land) owned by the church. Patriarch Abune Tewophilos was arrested in 1976 by the Marxist Derg military junta, and secretly executed later that year. The government ordered the church to elect a new Patriarch, and Abune Takla Haymanot was enthroned. The Coptic Church refused to recognize the election and enthronement of Abune Tekle Haimanot on the grounds that the Synod of the Ethiopian Church had not removed Abune Tewophilos and that the government had not publicly acknowledged his death, and he was thus still legitimate Patriarch of Ethiopia. Formal relations between the two churches were stopped, although they remained in communion with each other. Formal relations between the two churches resumed on July 13, 2007[1] 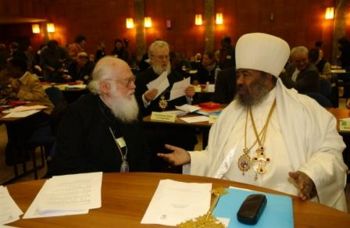 After Eritrea became an independent country, the Coptic Orthodox Church granted autocephaly to the Eritrean Orthodox Tewahedo Church with the reluctant approval of its mother synod, the Ethiopian Orthodox Tewahido Church.

As of 2005, there are many Ethiopian Orthodox churches located throughout the United States and other countries to which Ethiopians have migrated. There are about 37 million Ethiopian Orthodox members, or half the population, within the country.

The Canon of the Tewahedo Church is looser than for most other traditional Christian groups. The Ethiopian "narrow" Old Testament Canon includes the books found in the Septuagint accepted by the Orthodox plus Enoch, Jubilees, 1 Esdras and 2 Esdras, 3 books of Maccabees, and Psalm 151. However, their three books of the Maccabees are identical in title only, and quite different in content from those of the other Christian churches which include them. The order of the other books is somewhat different from other groups', as well. This Church also has a "broader canon" that includes more books.

The divine services of the Ethiopian Church are celebrated in the Ge'ez language, which has been the language of the Church at least since the arrival of the Nine Saints (Abba Pantelewon, Abba Gerima (Issac, or Yeshaq), Abba Aftse, Abba Guba, Abba Alef, Abba Yem'ata, Abba Liqanos, and Abba Sehma), who fled persecution by the Byzantine Emperor after the Council of Chalcedon (451). The Septuagint version was translated into Ge'ez. Sermons are delivered in the local language.

There are many monolithic churches in Ethiopia, most famously the twelve churches at Lalibela. After these, two main types of architecture are found—one basilican, the other native. The Church of Our Lady Mary of Zion at Axum is basilican, though the early basilicas are nearly all in ruin. These examples show the influence of those architects who, in the 6th century, built the basilicas at Sanaá and elsewhere in the Arabian Peninsula. There are two forms of native churches -- one square or oblong, traditionally found in Tigray; the other circular, traditionally found in Amhara and Shewa (though either style may be found elsewhere). The square type may be due to basilican influence, the circular is an adaptation of the native hut. In both forms, the sanctuary is square and stands clear in the center and the arrangements are based on Jewish tradition. Walls and ceilings are adorned with frescoes. A courtyard, circular or rectangular, surrounds the body of the church. Modern Ethiopian churches may incorporate the basilican or native styles, and use contemporary construction techniques and materials. In rural areas, the church and outer court are often thatched with mud-built walls.

Ark of the Covenant

The Ethiopian church claims that one of its churches, Our Lady Mary of Zion, is host to the original Ark of the Covenant that Moses carried with the Israelites during the Exodus. However, outsiders (and women, be they insiders or not) are not allowed into the building where the Ark is located, ostensibly due to dangerous biblical warnings. As a result, international scholars doubt that the real Ark is truly there, although a case has been put forward by controversial popular writer Graham Hancock in his book The Sign and the Seal.

Throughout Ethiopia, Orthodox churches are not considered churches until the local bishop gives them a tabot, a replica of the tablets in the original Ark of the Covenant. The tabot is six inches (15 cm) square and made from alabaster, marble, or wood (acacia). It is always kept in ornate coverings to hide it from public view. In an elaborate procession, the tabot is carried around the outside of the church amid joyful song and dance on the feast day of that particular church's namesake, and also on the great Feast of T'imk'et, known as Epiphany or Theophany.

The Ethiopian church places a heavier emphasis on Old Testament teachings than one might find in the Roman Catholic or Protestant churches, and its followers adhere to certain practices that one finds in Orthodox or Conservative Judaism. Ethiopian Christians, like some other Eastern Christians, traditionally follow dietary rules that are similar to Jewish Kashrut, specifically with regard to how an animal is slaughtered. Similarly, pork is prohibited, though unlike Kashrut, Ethiopian cuisine does mix dairy products with meat. Women are prohibited from entering the church during their menses, and, like married Orthodox Jewish women, are expected to cover their hair with a large scarf (or shash) while in church. As with Orthodox synagogues, men and women are seated separately in the Ethiopian church, with men on the left and women on the right (when facing the altar). However, women covering their heads and separation of the sexes in the Church building is common to many Oriental Orthodox, Eastern Orthodox and Catholic Christians and not unique to Judaism. Ethiopian Orthodox worshippers remove their shoes when entering a church, in accordance with Exodus 3:5 (in which Moses, while viewing the burning bush, is commanded to remove his shoes while standing on holy ground). Furthermore, both the Sabbath (Saturday), and the Lord's Day (Sunday) are observed as holy, although more emphasis, because of the Resurrection, is laid upon the Sunday.