Difference between revisions of "Elizabeth the New Martyr"

Grand Duchess Elizabeth Fyodorovna of Russia (Елизавета Фёдоровна), née Her Grand Ducal Highness Princess Elizabeth Alexandra Luise Alice of Hesse and by Rhine (February 24, 1864 – July 18, 1918), was the wife of Grand Duke Sergei Alexandrovich of Russia, the fifth son of Emperor Alexander II of Russia and Maria Alexandrovna (née Princess Marie of Hesse-Darmstadt). She was the second child and daughter of Grand Duke Louis IV of Hesse and Princess Alice of the United Kingdom, a daughter of Queen Victoria. She was also the elder sister of Alexandra Fyodorovna, the last empress of Russia. Elizabeth was affectionately called Ella by her family.

In the winter of 1878, diphtheria swept through the Hesse household, killing both Elizabeth's youngest sister and her mother, Princess Alice. Elizabeth was not in Hesse at the time and was the only member of the family not affected by this outbreak.

Elizabeth once caught the eye of her elder cousin William, II but Elisabeth flatly rejected him and instead married Grand Duke Sergei of Russia in June 1884.

She and her husband, Grand Duke Sergei, adopted and raised the Grand Duke Dmitri Pavlovitch and his sister Grand Duchess Maria Pavlovna after their mother died during Dmitri's birth. 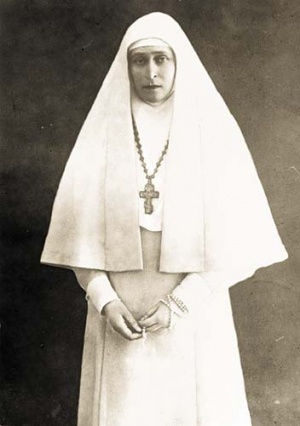 Grand Duchess Elizabeth Fyodorovna as a nun after her husband's death

Tragically, Elizabeth's husband was assassinated February 18, 1905, while on duty in the Kremlin, by socialist-revolutionary Ivan Kalyayev. Afterwards, Grand Duchess Elizabeth became a nun, giving away her jewelry and selling her most luxurious possessions. With the proceeds she opened the Martha and Mary Home in Moscow to foster the prayer and charity of devout women. For many years she helped the poor and orphans in this Moscowhome. Here there arose a new vision of a diaconate for women, one that combined intercession and action in the heart of a disordered world. In April 1909 Elizabeth and seventeen women were dedicated as Sisters of Love and Mercy. Their work flourished: soon they opened a hospital and a variety of other philanthropic ventures arose.

In 1918, the Communist government exiled her to Yekaterinburg and then to Alapaevsk, where she was violently killed by the local Bolsheviks on July 18, 1918, along with Grand Duke Sergei Mikhailovich Romanov; the Princes Ioann Konstantinovich, Konstantin Konstantinovich, Igor Konstantinovich, and Vladimir Pavlovich Paley; Grand Duke Sergei's secretary, Fyodor Remez; and Varvara Yakovleva, a sister from the Grand Duchess Elizabeth's convent. They were herded into the forest, pushed into an abandoned mineshaft, into which grenades were then hurled. An observer heard them singing Church hymns as they were pushed into the mineshaft. After the Bolsheviks left, he could still hear singing for some time. The last thing Elizabeth did as she lay dying in the mineshaft was to bandage the wounds of Prince Ioann with her handkerchief. Later the White Army briefly recaptured this area, and her relics were recovered and the account of the person who witnessed it recorded. Her relics were first taken by the White Army to Beijing and placed in the Church of St. Seraphim of Sarov, and then they were taken to Jerusalem and placed in the Church of St. Mary Magdalene, which she and her husband had helped to build.

She was glorified by the the Russian Orthodox Church Outside of Russia in 1981, and by the Russian Orthodox Church as a whole in 1992 as New-Martyr Elizabeth. Her principal shrine in Russia is the Ss. Mary and Martha Convent she founded in Moscow. She is one of the 10 20th-century martyrs from across the world who are depicted in statues above the Great West Door of Westminster Abbey in London.

Her feast is celebrated on July 5 (she was martyred on July 18, according to the New Calendar, which was July 5 on the Old Calendar. She is also commemorated on the feast of the New Martyrs and Confessors of Russia, celebrated on the Sunday nearest to January 25 (which was the date of the martyrdom of Metropolitan Vladimir of Kiev, the first of the new martyrs).

Causing meekness, humility and love to dwell in thy soul, / thou didst earnestly serve the suffering, / O holy passion-bearer Princess Elizabeth; / wherefore, with faith thou didst endure sufferings and death for Christ, with the martyr Barbara. // With her pray for all who honor you with love.

Taking up the Cross of Christ, / thou didst pass from royal glory to the glory of heaven, / praying for thine enemies, O holy martyr Princess Elizabeth; / and with the martyr Barbara thou didst find everlasting joy. // Therefore, pray ye in behalf of our souls.