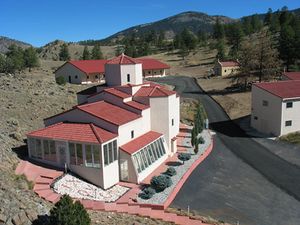 Description
Dormition Skete is located in the heart of the Colorado Rocky Mountains, now on 27 acres of beautiful mountain property, at 9,000 feet, in the more than 1 million acre San Isabel National Forest, Buena Vista, Chaffee County. The Skete is heated by solar energy, is designed specifically for icon painting, and can house 6 monks. There are three churches: the Kyriakon named in honor of the Holy Dormition of the Theotokos, and two chapels, one in honor of the Exaltation of the Holy and Life-Giving Cross, and the other dedicated to Saint George, the Great-Martyr. The Kyriakon is designed according to the traditional Athonite architecture established by Saint Athanasios of Mt. Athos, and is a little larger than the Katholicon of the monastery of Stavronikita on the Holy Mountain of Athos. Most of the work of construction was done by the monks of the Skete. 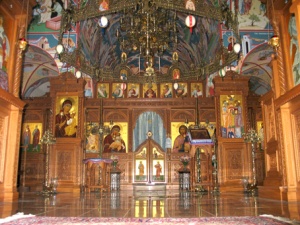 In the Orthodox monastic tradition there are three types of ascetic life. The first is a large community consisting of many monks. This type of establishment is generally called a monastery and, if large enough, may be called a lavra. The second type is called a skete. A skete is a small monastic community, which consists of a few monks, and they usually live in more isolated areas and have a more austere life. They live outside the bustle of the world, in the wilderness, and are under the shepherding eye of the abbot. The third is the retirement of a hermit who lives in solitude, seeking the Lord with the greatest of zeal.

Dormition Skete was founded in 1979 by then-Monk Gregory, with the blessing of Archbishop Seraphim of the Russian Orthodox Church Outside of Russia. Bishop Gregory came from the east coast to Colorado in 1978, with his eyes set upon the mountains to start skete life in America. He had on his person only $20. After one month, 10 acres were donated to him in the mountains of Colorado to start a small monastery, dedicated to prayer and solitude and the painting of Orthodox icons, and incense making as the main occupation for the monks to sustain themselves. The Monastery is self-supporting and does not solicit donations for its existence.

In 2003 the fathers constructed a new building which provides much more space for living quarters, offices, a reception room, etc. Most of the monastics now live and work in this building. All of the icon painting continues to be done in the original skete building, as it was designed to be well-suited to the art of iconography.

Dormition Skete is the base location for the Genuine Orthodox Church of America (GOCA) under the leadership of now Archbishop Gregory. GOCA maintains a presence in the US as well as Bulgaria, Italy, Brazil, and has a large and vibrant following in Congo.