Diocese of Batumi and Skhalta

This eparchy includes the ancient Georgian region of Adjaria.

According to Georgian chronicles, the St Andrew the First-called entered Georgia through Adjaria. The first churches were erected here in villages near the Black Sea. Adjaria had its own hierarch even in the fourth century, under the reign of King Mirdat III. Later, during the reign of St. King Vakhtang Gorgasali (remembered November 30), the diocese of Skhalta (i.e. Adjaria) was united into the diocese of Akhizi. 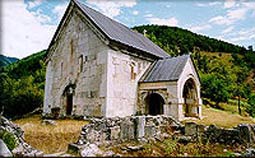 In the seventeenth century the Ottoman Empire invaded Adjaria and cut it off from Georgia. For three hundred years Adjaria was under Islamic rule. Many Georgians were martyred by the Turks; the Church comemorates them at Pentecost under the name "Georgian priests and laymen, martyred by the Turks."

After the Russian-Turkish War of 1877-1878, Adjaria was returned to Georgia. At that time nearly no Adjarians were Christians. But eventually Christianity began to revive, especially during the 1990s. By now, most Adjarians are Christians, though Islam is also practiced in the region.