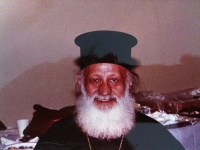 Demetrios T. Makris was born and educated in Greece, where he also entered the Holy Orders. Father Demetrios emigrated to the United States of America in 1938 and was assigned to St. Spyridon Greek Orthodox Church in Worcester, Massachusetts in 1940, serving until 1944. While at St. Spyridon Church, Fr. Demetrios was instrumental in the purchase of the site of the present St. Spyridon Cathedral in Worcester.

On September 14, 1951, Fr. Demetrios was consecrated Bishop of the Titular See of Olympus and served the First Archdiocesan District that included Maryland, New York, New Jersey, Ohio, Pennsylvania, and Washington, D.C. From 1955 to 1968, Bishop Demetrios served as the bishop of the fourth district of San Francisco. Then, from 1968 to 1973, he served the third district of Boston.