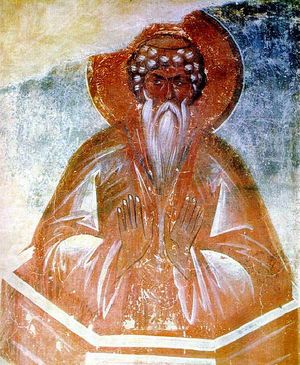 St Daniel the Stylite
Our venerable and God-bearing Father Daniel the Stylite (from Greek stylos, "pillar") was an ascetic who lived for 33 years on a pillar near the city of Constantinople. St. Daniel was a disciple of St. Symeon the Stylite and followed his example after Symeon reposed. He was a counsellor of the emperors of the Eastern Roman Empire: Leo the Great, Zeno, and Basiliscus. St. Daniel is remembered on December 11.

In 409, a male child was born to Elias and Martha. The child came to Martha, who had been childless for a long time, after she had vowed in her prayers that if she had a child the child would be dedicated to the Lord. Daniel was born in the village of Marutha in the region of Mesopotamia near Samosata. Since the child was born through the good will of God, they vowed that he should receive his name from God.

The child remained nameless until he was five years old when they visited a monastery and approached the igumen to provide a name for the child. The igumen opened at random one of his service books and found the name of the Prophet Daniel on the page. Thus, Martha's son received his name of Daniel. His parents asked the igumen if he would allow young Daniel to remain at the monastery. This he refused, noting that Daniel was still very young. Daniel remained with his parents until at the age of twelve when he left home for a nearby monastery without his parents' knowledge. At the monastery, the abbot reluctantly agreed to accept the persuasive Daniel into the brotherhood.

Soon afterwards his parents found the young Daniel in the monastery and rejoiced in his joining the monastery. They asked the archimandrite to give Daniel a tonsure as a monk. Again the abbot hesitated because of his age. After Daniel persuasively demonstrated his readiness for a monastic life, the abbot assembled the brotherhood and bestowed on Daniel the robe of a monk.

While accompanying his abbot on a call by their archbishop to assemble in Antioch, the party lodged at a large monastery at the village of Telanissae where St. Symeon the Stylite lived on a pillar. There, Daniel sought and received the blessing of St. Symeon.

In time, Daniel was found worthy of being raised to the rank of archimandrite and to the post of abbot. At the age of 42, Daniel then left the monastery for Jerusalem and while en route traveled to see Symeon the Stylite with whom he spent two weeks. While continuing his journey to Jerusalem, Daniel met a monk on the road who convinced Daniel that he should instead go to Constantinople.

Upon arrival in Anaplus near Constantinople, Daniel took residence in the Church of the Archangel Michael from which he had rid demons. Daniel was greeted warmly by Patriarch Anatolius. Soon after Daniel's arrival in Constantinople, Patr. Anatolius fell seriously ill. He called Daniel and asked that Daniel offer prayers for him. These prayers were answered with the recovery of the patriarch.

After staying in Anaplus for nine years, Daniel received a vision of Symeon standing on a column above a huge pillar of cloud. Daniel was borne up to Symeon, who greeted Daniel with a holy kiss and declared to him, "Stand firm and play the man." After describing the vision to those around him, they counseled Daniel to mount a pillar and to take up the mode of life that Symeon had led. Several days later the monk Sergius, who was a disciple of Symeon, arrived in Constantinople bearing the news of Symeon's repose. Sergius had with him St. Symeon's leather tunic that he was to be give to Emperor Leo I.

Since the emperor busy with affairs of state, Sergius was not able to present Symeon's tunic to him in the city. Sergius then decided to continue on the Monastery of Akoimetoi (The Sleepless Ones). En route, the sailors of the boat transporting Sergius related a story of Daniel's victory over demons that had previously destroyed boats passing on their route. Hearing this, Sergius changed his route to visit Daniel.

Upon meeting, Daniel related to Sergius his vision after had heard of the last days of the holy Symeon. Hearing Daniel's vision, Sergius declared, "It is thee rather than to the emperor that God has sent me, for here am I, the disciple of thy father; here, too, is his benediction." After this, Sergius handed Symeon's tunic to Daniel. Daniel accepted the tunic with tears, and Sergius now became a disciple of Daniel.

Having accepted the tunic from the holy Symeon, Daniel had a pillar erected nearby, ready to assume the life of his mentor. Soon Daniel took his place on the pillar, remaining for varying periods of time on one or another of three pillars for remaining 33 years of his life. Many people came to Daniel's pillar, the sick and unfortunate as well as those seeking his blessing. All received help and healing from the holy Daniel. Among those who paid homage to the holy Daniel and sought his prayers were the Emperor Leo and Patriarch Gennadius, as well as members of the imperial court. The holy Daniel possessed the gift of gracious words as he guided many onto the path changing their lives.

Reflecting on the many benefits that came through Daniel's prayers, the emperor requested of Patr. Gennadius that the holy Daniel be honored with the rank of priest. Initially, he did not consent to ordination, but after a prayer of ordination Daniel consented by receiving the Holy Gifts from Gennadius.

Among his prophesies was his prediction, that had been made known to the emperor and to the patriarch, of the great fire in Constantinople. The sainted Daniel stood firm through all types of weather through all seasons. It was through his initiative that the relics of the St Symeon were brought from Antioch to Constantinople. Daniel defended the Church against the error of the Eutychians.

In 475, during the reign of the Emperor Zeno, the senator Basiliscus, Leo's brother-in-law and a Miaphysite, usurped Leo's throne. As he had championed the Miaphysite position, Patriarch Acacius opposed Basiliscus, who then ventured to Daniel to obtain his blessing. Instead Basiliscus received Daniel's condemnation. With the Orthodox faith in question, Patr. Acacius begged that Daniel come down from his pillar and travel to Constantinople, to the Great Church, and confront Emperor Basiliscus on the question of his faith. Then, for the only time in his 33 years on the pillar, Daniel came down from it to travel to the Great Church, there to confront the emperor on his faith. Having received Daniel's condemnation and now in Daniel's presence, and among the faithful in Hagia Sophia, Basiliscus was asked to state his belief. With Abp. Acacius kneeling beside him, and in response to Daniel's counseling that they seek the way of peace, Basiliscus affirmed his orthodoxy.

Daniel returned to his pillar, where he remained until his repose on December 11, 493.