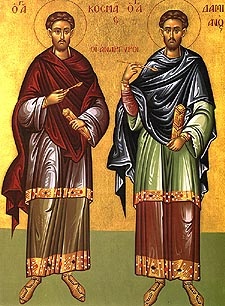 Holy unmercenaries and wonderworkers, Cosmas and Damian, visit our infirmities. Freely you have received; freely give to us.

Having received the grace of healing, you grant healing to those in need. Glorious wonder workers and physicians, Cosmas and Damian, visit us and put down the insolence of our enemies, and bring healing to the world through your miracles.