Our father among the saints Colman of Lindisfarne was a monk of the seventh century church of Scotland and Ireland and abbot/bishop of the Monastery of Lindisfame in England. He led the Celtic party at the Synod of Whitby. His stand for the Celtic rite led to his identification as the Last Columban Abbot of Lindisfarne, Founder of Inishbofin and Mayo. His feast day is February 18. 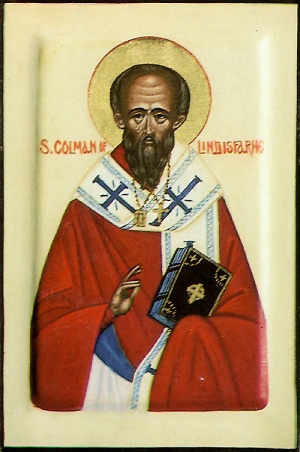 St Colman of Lindesfarne
Colman was born in Connaught, Ireland about the year 605. Little else is known of his early life. He was tonsured a monk at the monastery at Iona during the period Segenius was abbot. He was a disciple of St. Columba and studied with his contemporaries Ss. Finian and Aidan.

After St. Finian died in 661, Colman was chosen to succeed him as the third abbot/bishop of Lindisfame. During his short episcopate Colman was noted for the example he made of frugality and simplicity of living and for the devotion of his clergy to their business of preaching the word of God and ministering to the people.

Bp. Colman's episcopate was during the time of the ascendency of the Latin rite of Rome during which the practices of Rome were slowly impressed upon the Celtic Church. While the controversy centered around the calculation of the date for Easter (Pascha), other aspects of church life were also in dispute, particularly the issue of the authority of local monastic leaders verses that of distant Roman church authorities, how far the secular authority of the king should extend over spiritual affairs, and the maintenance the theological significance of the monastic tonsure. In these issues, Bp. Colman was the chief defender of the Celtic practices.

At the Synod of Whitby in 664, Bp. Colman led the defense of the Celtic methods, but as neither side was able to prove their claims, King Oswy made a royal decision to follow the Roman practices, a decision that brought general acceptance but which Colman refused to accept. He resigned from his see and left for Iona with all of the Irish and thirty English monks from Lindisfarne.

Bp. Colman remained in Scotland for the next three years, actively founding a number of churches before moving to his native Ireland with about thirty Irish and English disciples. In Ireland, the group of monks settled down on a remote island called Inishbofin, meaning "island of the white cow", where Colman established a monastery and a school. Initially successful, the community came into conflict as the English monks accused the Irish of leaving the monastery in the summer to go preaching when they were needed for their labor growing the crops, yet, in the winter, after returning expected equal sharing of the harvest. Bp. Colman settled the problem by moving the English monks to the Irish mainland, to a place he named Mayo of the Saxons. Mayo became well regarded as a center of sanctity and learning. The community became a episcopal see and a monastery where the community elected their abbot instead of following the Celtic practice of a "hereditary" monastery.

St. Colman later returned to Innisboffin where he reposed on February 18, 675.