Circumcision of our Lord 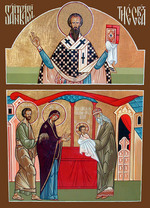 The Church observes the feast of The Circumcision of our Lord, eight days after the Nativity. This is commemorated on January 1 and has neither a Forefeast nor an Afterfeast.

In submitting to the Law of Circumcision, Our Lord signifies that He is the fullness and the completion of the Old Covenant. St. Paul says, in the Epistle Lesson read on the Feast: For in [Jesus] the whole fullness of deity dwells bodily, and you have come to fullness of life in Him, Who is the head of all rule and authority. In Him also you were circumcised with a circumcision made without hands, by putting off the body of flesh in the circumcision of Christ (Col. 2:9-11).

The Church Fathers explain that the Lord, the Creator of the Law, underwent circumcision in order to give people an example of how faithfully the divine ordinances ought to be fulfilled. The Lord was circumcised so that later no one would doubt that he had truly assumed human flesh, and that his Incarnation was not merely an illusion, as certain heretics (Docetists) taught.

Additionally, he received the name Jesus (Savior) on this day. These two events, the Lord's Circumcision and Naming, remind Christians that they have entered into a New Covenant with God.

Enthroned on high with the Eternal Father and Your divine Spirit,
O Jesus, You willed to be born on earth of the unwedded handmaid, your Mother.
Therefore You were circumcised as an eight-day old Child.
Glory to Your most gracious counsel;
Glory to Your dispensation;
Glory to Your condescension, O only Lover of mankind.

The Lord of all accepts to be circumcised,
Thus, as He is good, excises the sins of mortal men.
Today He grants the world salvation,
While light-bearing Basil, high priest of our Creator,
Rejoices in heaven as a divine initiate of Christ.