Difference between revisions of "Church of Latvia" 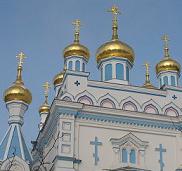 The Orthodox Church of Latvia (Latvian: Latvijas Pareizticīgā Baznīca, Russian: Латвийская Православная Церковь) is a semi-autonomous part of the Russian Orthodox Church with canonical jurisdiction in Latvia. Its primate, with the title Metropolitan of Riga and all Latvia is currently Alexander (Kudryashov).

The Latvian Orthodox Church currently numbers 118 parishes and 92 clergy (79 priests and 13 deacons), one monastery, two convents, and one theological seminary. The church authors several publications in both Russian and Latvian.[1]