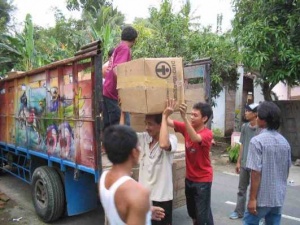 Church World Service (CWS) is the relief, development and refugee assistance ministry of the thirty-five Protestant, Orthodox and Anglican communions that make up the National Council of Churches of Christ in the USA. Working in partnership with indigenous organizations in more than eighty countries, CWS works worldwide to meet human needs and foster self-reliance. It was founded in 1946.

Within the United States, Church World Service assists communities in responding to disasters; resettles refugees; promotes national and international policies it sees as fair; provides educational resources; and offers opportunities to join a people-to-people network of local and global caring through participation in various projects.

Church World Service was founded in 1946, following the end of the Second World War. The purpose of CWS was to coordinate relief sent to suffering populations in Europe. One of the early projects of CWS involved the coordination of Friendship Trains, which were popularized by the columnist Drew Pearson and run under the Christian Rural Overseas Program (CROP). In this program, freight trains travelled the length of the country, picking up agricultural goods at stops along the way. When the goods arrived on the East Coast of the United States, they were loaded into ships and delivered to Europe.

In the late 1960, CWS began to organize CROP Hunger Walks, in which individuals agreed to walk to raise funds for hunger relief. Unlike similar walks organized by other groups, 25% of funds raised were earmarked for distribution to local hunger-fighting organizations. Also, donors have the option to designate the remaining funds to other organizations besides CWS, such as Lutheran World Relirf, American Jewish World Service, WorldVision, and International Orthodox Christian Charities. Many Orthodox parishes participate in CROP Walks nationally. In particular, the Lancaster, Pennsylvania CROP Walk was organized in the 1970s by the proistamenos of Annunciation Greek Orthodox Church, Fr. Alexander Veronis, who continued to chair the walk as of 2007.

The program of Church World Service is organized around five areas:

Orthodox Christians have been involved with Church World Service since shortly after its inception. A significant component of CWS relief work following WWII supported the needs of displaced persons in camps based in Central and Eastern Europe, and many older persons in America today recall encountering CWS relief personnel during those years. The Orthodox members of CWS are represented on the Board of Directors and on Board committees by several representatives, and Orthodox Christians have served in key leadership positions. The legate of the Armenian Diocese of America, Bishop Vicken Aykazian served as Secretary of the organization from 2000-2003, and John Paterakis of the Greek Orthodox Arcidiocese of America currently serves as Treasurer.

Current Board of Directors members include:

In addition to the Board members, Orthodox are represented on committees of the Board by

Peter Mikuliak served for a number of years as New Jersey regional representative for CWS. Additionally, following the fall of communism in Eastern Europe, Peter worked in Bosnia developing and nurtering CWS projects to provide relief in the region. The current Director of Mission Relationships and Witness is David Weaver, a graduate of St. Vladimir's Orthodox Theological Seminary.

Church World Service and International Orthodox Christian Charities have an extremely close working relationship. Both are members of the relief consortium Action By Churches Together and coordinate their efforts in providing relief worldwide. In addressing the South Asia tsunami of 2004, the bulk of relief work supported by IOCC was in fact managed by Church World Service and its partners. Conversely, CWS has provided significant support for IOCC relief projects, particularly in Iraq.

IOCC has undertaken the promotion of CWS' Gift of the Heart Kits program, which involves the assembly of health and care kits for persons affected by disasters. Following Hurricane Katrina, a significant number of the kits provided by Church World Service were assembled by Orthodox parishes.

The Executive Director of IOCC, Dean Triantafilou, sits on the Board of Church World Service and on the Emergency Relief Committee of the Board. In late 2006, the senior staffs of CWS and IOCC met in Baltimore to explore ways to expand the working relationship. Since then, members of the staffs have visited each other's offices in Baltimore, New York and Indiana in pursuit of greater collaboration.

In 2006, CWS organized the Interfaith Summit on Africa, which brought faith leaders from Africa to meet and discuss issues with policy makers and legislators in Washington. Among the more than 50 leaders were the Archbishop of Johannesburg, Seraphim (Kykkotis).