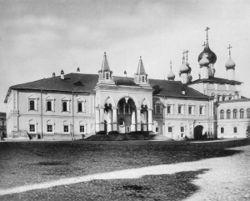 Chudov Monastery in the Moscow Kremlin - 1882

The Chudov Monastery (Russian: Чу́дов монасты́рь) - more formally known as Alexis' Archangel Michael Monastery-, located in Moscow, Russia, was destroyed during the Soviet times. The monastery was closely associated with the rulers of Moscow and was the baptismal place for Russian royal children. The monastery was dedicated to the miracle (chudo in Russian) of the Archangel Michael at Chonae (Colossae) and is often referred to as the Monastery of Miracles. September 19 is the monastery's feast day.

Chudov Monastery was established in the Moscow Kremlin in 1358 by Metropolitan Alexis of Moscow. Part of the land for the monastery was land given by the Khan of the Kypchak Horde to Metr. Alexis as a reward for the service provided by Alexis in treating the ailing favorite wife of the Khan at Sarai.

The original cathedral in the monastery was completed in 1365, but was replaced in 1431, and again with another new structure during the years 1501 to 1503. Chudov Monastery was among the trio of Moscow monasteries that were the centers of book culture and learning in Moscow. The others were Simonov Monastery and Holy Trinity-St. Sergius Lavra. Among the prominent monks of the monastery who dedicated their lives to translating ecclesiastic books are Maximus the Greek, Yepifany Slavinetsky, and Karion Istomin. This dedication to learning is evident in the work of the Hegumen Gennady of Chudov, who, later in 1499, as Archbishop of Novgorod patronized the translation of the codex of the Bible into Slavic. Until 1561, the abbot (hegumen) of Chudov Monastery was considered first among the hegumens of all Russia.

Chudov Monastery was the place where Patriarch Hermogenes was martyred by starvation at the hands of the Poles during the Time of Troubles in 1612.

With the establishment of the Romanov dynasty as tsars of Russia in 1613 and the end of the Time of Troubles, a Greek-Latin school was opened within the monastery with the support of Patriarch Philaret. In the following years new churches were added to the monastery compound. The Churches of St. Alexis, the Metropolitan, and of the Annunciation were completed in 1680.

During Napoleon's invasion of Russia and capture of Moscow in 1812, the monastery was occupied by the French. French Marshal Louis Nicolas Davout commandeered the monastery for his own use and used the altar area of the cathedral for his office, a desecration documented in Vasili Vereshchagin's painting. After the monastery was recovered following Napoleon's retreat, the Church of St. Andrew was completed in 1887.

The monastery did not survive the Soviet period. The Bolsheviks closed the monastery in 1918 and destroyed all the structures of the monastery by 1929. The adjacent Ascension Convent suffered the same fate. The library of manuscripts from the eleventh to the eighteenth centuries was moved to the State Historical Museum. However, the relics of those who had been interred at monastery were dispersed and lost except of those of Metr. Alexis which had been moved from the Church of St. Alexis to the Cathedral of the Dormition and then to another church in Moscow. On the land that both monasteries occupied, the Bolsheviks built the Red Commanders School.