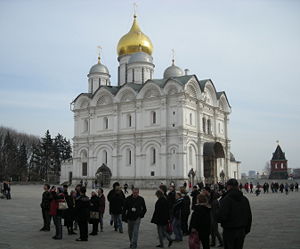 Cathedral of Archangel MIchael in the Kremlin of Moscow

Grand Prince Basil III of Moscow commissioned the construction of the present cathedral that was built between 1505 and 1508. Architect Alvise Lamberti de Montagnano, known in Russia as Alevizo Novy, an Italian sculptor from Venice, Italy, was selected to supervise the construction. His design combined the traditional Russian form of a structure of five domes and six pillars with Italian Renaissance decorative features. The cathedral with a combination of pilasters with capitals and scallop-shell motifs, cornices, a false arcade, and other decorative details influenced Russia architects in the following years.

In later years, the cathedral under went several changes that altered its appearance. Two chapels were added to the sides of the structure in the latter years of the sixteenth century, and in the eighteenth century the helmet-shaped central dome was replaced by a dome that is onion-shaped.

The frescoes in the interior were done between 1652 and 1666, by a team almost one hundred artists under the direction of the icon painters Simon Ushakov, Stepan Rezanets and Fyodor Zubov. The ceiling of the cathedral is covered by paintings that tell the story of the reign of God from creation to the Last Judgement. The side walls depict the Archangel Michael in his battle with Satan.

THe original iconostasis was burned by Napoleon's troops during his short occupation of Moscow in 1812. The present forty three foot tall iconostasis dates from 1813 and holds icons that were mainly painted between 1679 and 1681. The icon of Archangel Michael in full armor is the oldest in the cathedral and is believed to have been painted in the late fourteenth century.

The cathedral contains forty six tombs of the rulers of the Duchy of Moscow and Russia from the fourteen the century until Peter I moved the capital of Russia to St. Petersburg. Of special note is the burial chamber of Ivan IV, the Terrible, who was the first Tsar of Russia. A total of fifty four burials are in the cathedral.

The cathedral was closed after the October Revolution in 1917 and was opened to the public as a museum in 1955.