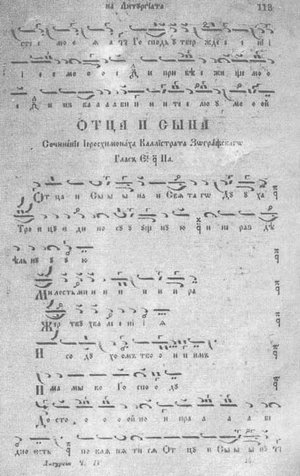 Chrysanthos of Madytos (ca. 1770-1846), Gregory the Protopsaltes, and Chourmouzios the Archivist (called the Three Teachers) were responsible for a much-needed reform of the notation of Greek ecclesiastical music. Essentially, this work consisted of a simplification of the Byzantine musical symbols which, by the early 19th century, had become so complex and technical that only highly skilled chanters were able to interpret them correctly. Despite its numerous shortcomings the work of the three reformers is a landmark in the history of Greek Church music, since it introduced the system of neo-Byzantine music upon which are based the present-day chants of the Greek Orthodox Church.

Where is Byzantine notation used?

Generally, Byzantine notation is used in churches whose musical tradition is Byzantine chant, those near (or by people who are from churches near) Constantinople, generally the Greek Orthodox, the Church of Constantinople, the Church of Alexandria, the Antiochian Orthodox, and the Romanian Orthodox Church. The Serbian Orthodox use a slightly different system of music; the Russian Orthodox use what is essentially Western notation and music. In recent times, several churches in America have also begun using Byzantine notation now that such music is available in English online from St. Anthony's Greek Orthodox Monastery (Florence, Arizona) and St. Gregory Palamas Monastery (Hayesville, Ohio). Also, it is worth mentioning that some Eastern Rite Catholics use Byzantine notation.

Western notation is based on a staff, where the pitch is determined by the location of the note with regard to the staff, regardless of the previous note. Byzantine notation, on the other hand, is relational; the note is dependent on the previous note and the symbol itself, which specifies the interval from the previous note.

While there are differences in speed and in whether a certain note should be flat or sharp in Western music, Byzantine music has this down to a (very complicated) artform, using certain tones which always have a specific note being sharp or flat.

Byzantine music has eight tones (or modes), sometimes associated with particular "moods" (though the notion that the music is designed to be emotional would certainly be distasteful to the saints who developed it). Also, much of Byzantine chanting can be done without use of written music, due to the use of original melodies (Greek, αυτόμελον) and improvisation. While there are tens of thousands of hymns in Byzantine music, they are all based on less than two hundred original melodies.