St. Bishoy (320-417 A.D.), the great Egyptian desert father who saw our Lord Jesus Christ and whose incorrupt body is preserved to this day at the Coptic Orthodox monastery bearing his name at Wadi El-Natroun, Egypt, was known for his love, meekness, simplicity, and his extremely ascetic and prayerful life.

Coptic icon of St. Bishoy (320-417 A.D.)
On 8 Abib (Coptic month) - 15 July, St. Bishoy, whose memorial is honorable, the star of the desert, departed. He was born around 320 A.D. in a village called Shansa (Shensha or Shesna), in the province of Menoufeya in Egypt. He had six brothers. His mother saw an angel in a vision saying to her, "The Lord says to you, give Me one of your children to serve Me." She answered, "Lord, take whoever you want." The angel took the hand of Anba (Abba) Bishoy, who was thin and his body was frail. His mother told the angel, "My Lord, take one who is strong to serve the Lord." "This is whom the Lord has chosen," the Angel replied. 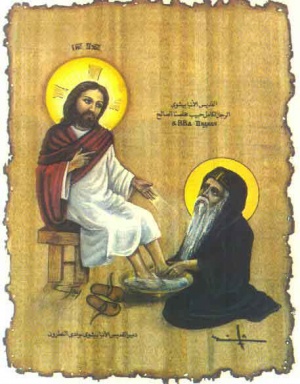 Coptic icon of Abba Bishoy washing the feet of our Lord Jesus Christ
It is said that because of St. Bishoy's love for God and his desire to be with Him always, he used to tie his hand with a rope to the ceiling of his cell in order to resist sleeping during his night prayers. St. Bishoy struggled in much asceticism and many worships that made him worthy to see the Lord Jesus Christ.

We are told that Saint Bishoy met our Lord Jesus Christ on several occasions. On one such occasion, he carried Our Lord, Who met him as an old man on his way, and that it is for this reason that his body remains incorrupt to this day. Saint Bishoy is also said to have washed the feet of the Lord, Who visited him as a poor stranger. 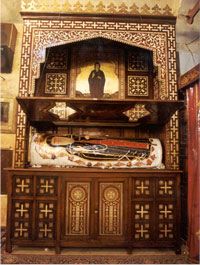 The incorrupt body of St. Bishoy in the main church of the monastery bearing his name in Wadi-El-Natroun, Egypt
In 407/408 A.D., when the Berbers invaded the wilderness, he left it and dwelt on Mount Ansena, where he departed. He met St. Paul of Tammah in Antinoopolis, near the present-day town of Mallawi (currently known as 'Deir-El-Barsha'). Their love for each other was such that God promised them that they would never be parted. After the time of persecution had ended, they brought his body with the body of St. Paul of Tamouh to his monastery in the wilderness of Shiheet. The incorrupt body of St. Bishoy and the relics of St. Paul still lie together in the main church of the Coptic Orthodox Monastery of Saint Bishoy in Wadi-El-Natroun until this day.