Difference between revisions of "Athenagoras (Aneste) of Mexico" 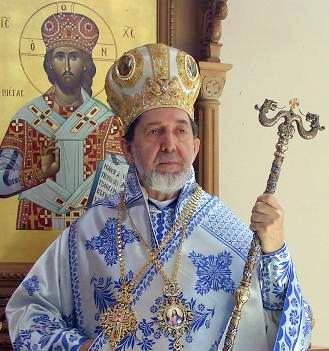 His Eminence Metropolitan Archbishop Athenagoras (Aneste) of Mexico is the ruling hierarch of the Greek Orthodox Metropolis of Mexico, Central America, Columbia, Venezuela, and the Caribbean Islands under the jurisdiction of the Ecumenical Patriarch of Constantinople.

Born on September 17, 1941 in Chicago, Illinois, George Angelo Aneste received his elementary and high school education in Chicago before beginning his theological education at Hellenic College/Holy Cross Seminary in Brookline, Massachusetts. Following his first year of studies, he transferredto the Theological School of the University of Athens, Greece in 1959 where he received his Masters of Theology Degree in 1965. Fr. Athenagoras also pursued graduate studies at the University of Michigan (Ann Arbor Campus) where in 1973 he received a Masters Degree in Russian Literature.

George was ordained a deacon on December 19, 1965 at the Annunciation Cathedral of Chicago, receiving the ecclesiastical name, Athenagoras. In 1966, Dn. Athenagoras was appointed deacon and secretary to His Grace Bishop Timotheos of Rodostolon, in Toronto, Ontario Canada. On July 21, 1967, he was ordained a priest at the parish of St. George in Toronto, Ontario Canada.

In August 1973, Fr. Athenagoras was appointed Chancellor of the Diocese of Chicago of the Greek Orthodox Archdiocese of America, where he served until January 1979. In his capacity as Chancellor, Fr. Athenagoras represented the Greek Orthodox Church in the midwest in a number of capacities, assisted in administering the vast region of the diocese, and served as General Secretary of the Clergy Laity Congress of the Archdiocese of North and South America, which convened in Chicago in July 1974.

Upon the direction of His Eminence Archbishop Iakovos, Fr. Athenagoras chaired the Committee of Clergy and Young Adults that restructured the Senior GOYA, as the Young Adult program of the archdiocese, that, in 1975, was established as the Young Adult League (YAL) and that wrote the YAL Manual which defines the work and activities of the YAL to this day. Also during 1975, His Eminence Archbishop Iakovos appointed Fr. Athenagoras the first National Director of the newly established Young Adult League. In this capacity, Fr. Athenagoras convened the first YAL Conference in Philadelphia during July 1976.

On August 22, 1982, Fr. Athenagoras was consecrated Auxiliary Bishop to His Eminence Archbishop Iakovos at Holy Trinity Cathedral of New York with the title Bishop of Dorylaion. In his capacity as an auxiliary bishop, Bp. Athenagoras represented the Greek Orthodox Archdiocese at numerous civic and religious functions. He served as General Secretary of the Standing Conference of the Canonical Orthodox Bishops in the Americas. He was the official representative of the Archdiocese to the National Council of Churches and also served as national coordinator of the three major dialogues between the Orthodox Church in America and the Roman Catholic, the Anglican, and the Lutheran Churches. In 1987, in the presence of many Cardinals and Roman Catholic Hierarchs and many Orthodox Hierarchs in America, Bp. Athenagoras was the guest speaker at St. Patrick’s Cathedral of New York on the occasion of the celebration of the 1,200 anniversary of the Seventh Ecumenical Council. As auxiliary bishop to the Archbishop, Bp. Athenagoras also administered the Greek Orthodox parishes of Connecticut and Up-State New York and served as the overseer for St. Basil’s Academy.

On December 2, 1996, Bp. Athenagoras was elected unanimously by the Holy and Great Synod of Constantinople to the newly established Metropolitan Archdiocese of Central America and the Caribbean. He was enthroned on January 25, 1997. The area of jurisdiction of the Metropolitan Archdiocese includes the Countries of Mexico (where His Eminence resides), Venezuela, Colombia, all the Countries of Central America (Belize, Honduras, Nicaragua, Panama, Guatemala, Costa Rica, El Salvador) and the Islands of the Caribbean, including Puerto Rico, Haiti, the Dominican Republic and Cuba.