Difference between revisions of "Athanasius Parios" 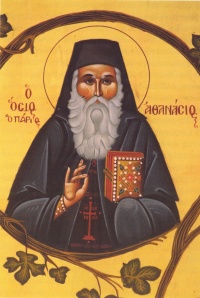 Our venerable and God-bearing Father Athanasius Parios, known as "Master of the Greek Nation," was a hieromonk who was an eminent theologian, philosopher, educator, and hymnographer of the eighteenth century. He was the second leader of the Kollyvades movement, succeeding Neophytos Kausokalyvites (1713-1784). He also wrote the lives of a number of saints. He is commemorated by the Church on June 24.

Athanasius was born during either the year of 1721 or 1722 to Apostolos and Siphnios Toulios in the village of Kostos, on the island of Paros. On Paros, he received instruction in the "common letters." Desiring higher education, he left home and traveled to Smyrna, to study at the Greek school of that city. The school, founded in 1717, was later named the Evangeliki School. He resided in Smyrna for six years, diligently applying himself to all the subjects that were taught there.

In 1752, he traveled to Mount Athos and enrolled in the Athonias Academy, where he studied under Neophytos Kausokalyvites and Eugenios Voulgaris. At Mount Athos, he was ordained a priest by St. Marcarius of Corinth. He later studied at Corfu under Nikephoros Theotokis.

At Mount Athos, Fr. Athanasius became a leading member of the Kollyvades movement that began at Mount Athos in the mid eighteenth century. The group consisted of Athonite monks who adhered strictly to Holy Tradition and opposed unwarranted innovations. They favored frequent reception of Holy Communion, unceasing prayer of the heart, and insisted memorial services not be performed on Sundays, as it was the day of the Lord's Resurrection.

Between 1767 and 1770, he taught at Thessaloniki, after which he returned to the Athonias Academy to become its director. As a member of the Kollyvades movement, he came under attacks by those who opposed the movement. In 1776, Fr. Athanasius was condemned as a heretic, defrocked, and excommunicated by Patriarch Sophronios II and the Holy Synod of Constantinople. In 1781, following his appeal to Patr. Gabriel IV, the charges against him were proven absurd and unfounded, and Patr. Gabriel IV and the Holy Synod lifted his suspension and restored to him to his priestly rank.

In 1788, Fr. Athanasius moved to the island of Chios where he taught and served as director at the gymnasium until 1812. A leading educator and distinguished theologian, Fr. Athanasius revived the art of eloquent speech on Chios by teaching logic, rhetoric, metaphysics,and theology.

After retiring, at the age of 90, as the Director of schools in 1812, Fr. Athanasius joined St. Nicephorus of Chios at the Hermitage of St. George the Refston at Resta, Chios where he spent his final days. There, he reposed in the Lord on June 24, 1813.

Fr. Athanasius was glorified by God and was officially recognized as a saint of the Orthodox Church in 1995.

St. Athanasios of Paros, together with St. Macarios of Corinth and St. Nicodemos the Hagiorite were the three great spiritual leaders of the eighteenth century in Greece and leaders of the "Kollyvades Movement." The is the first English-language life of St. Athanasios, theologian, hymnographer, writer of lives of saints and philosopher. Also contains reviews and selected passages from his writings, and a brief account of the life of St. Macarios of Corinth. 170pp.