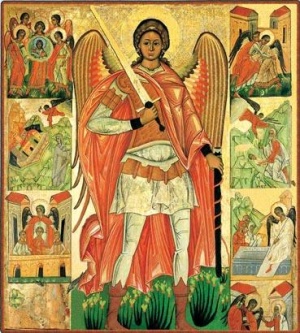 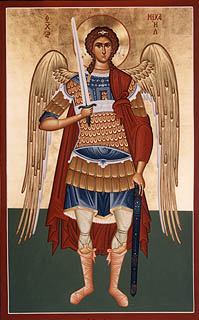 As the Chief Commander of the Heavenly hosts, Michael usually holds a sword in one hand; in the other he often carries either a shield, date-tree branch, a spear, or a white banner (possibly with a scarlet cross). Some icons of the Archangel Michael (or the Archangel Gabriel) show the angel holding an orb in one hand and a staff in the other. [1]

Michael is also represented in icons as standing on a horizontal body and with his left arm held high, holding a small image of a "baby". The body represents a human being at the time of his death and the image of the "baby" represents the soul of the deceased. This icon came about since the belief has always been held that the Archangel Michael takes the souls of the dead with the Guardian Angel. A good example of this type is the miraculous and wonder-working Archangel Michael of Panormitis icon in Symi of Greece.

He is most likely to be wearing red. In many instances, Michael tramples the devil under his feet, which may be depicted as a dragon. This comes from the tradition that Michael was the main opponent of Satan in the battle for Heaven. Satan, previously called Samael, was always looking to discredit Israel, while Michael was its main protector. In the end, Satan attempted to drag Michael down in his fall from the heights, but Michael was rescued by God.

There is only one 'icon' in the Orthodox church tradition that defies the traditional structure of iconography. This is the icon of Mantamados that exists in Mytilene, Lesvos.