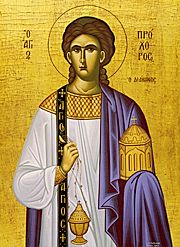 Prochororus the Deacon
The holy, glorious and all-laudable Apostle Prochorus of the Seventy was among the first deacons in the Church along with Stephen, Philip, Parmenas, Nicanor, Timon and Nicholas. Although they died at various times and in various places, they are commemorated together on July 28. St. Prochorus is also commemorated on January 4 with the Synaxis of the 70 Holy Apostles.

In the Acts of the Apostles (6:1-6) it is said that the twelve Apostles chose seven men full of the Holy Spirit and wisdom, and appointed them to serve as deacons.

St. Prochorus at first accompanied the holy Apostle Peter and was made by him bishop in the city of Nicomedia. After the Dormition of the Most Holy Theotokos, Prochorus was a companion and coworker of the holy Apostle John the Theologian and was banished to the island of Patmos together with him. There Apostle and Evangelist John wrote down the Book of Revelation concerning the final fate of the world. Upon returning to Nicomedia, St. Prochorus converted pagans to Christ in the city of Antioch and there he received a martyr's crown.

Holy apostle Prochorus of the Seventy;
entreat the merciful;
to grant our souls forgiveness of transgressions.

The Church ever sees you as a shining star, O apostle Prochorus,
Your miracles have manifested great enlightenment.
Therefore we cry out to Christ:
"Save those who with faith honor Your apostle, O Most Merciful One."