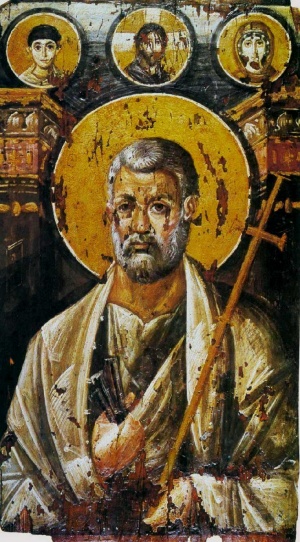 The holy, glorious and all-laudable Apostle Peter is the leader of the twelve apostles of Jesus Christ. His feast is celebrated on June 29 along with the Apostle Paul.

The divinely-blessed Peter was from Bethsaida of Galilee. He was the son of Jonas and the brother of Andrew the First-called. He was a fisherman by trade, unlearned and poor, and was called Simon; later he was renamed Peter by the Lord Jesus Christ himself, who looked at him and said, "Thou art Simon the son of Jonas; thou shalt be called Cephas (which is by interpretation, Peter)" (John 1:42).

On being raised by the Lord to the dignity of an Apostle and becoming inseparable from him as his zealous disciple, he followed him from the beginning of his preaching of salvation up until the very Passion, when, in the court of Caiaphas the high priest, he denied Him thrice because of his fear of the Jews and of the danger at hand. But again, after many bitter tears, he received complete forgiveness of his transgression. After the Resurrection of Christ and the descent of the Holy Spirit, he preached in Judea, Antioch, and certain parts of Asia, and finally came to Rome, where he was crucified upside down by Nero, and thus he ascended to the eternal habitations about the year 66 or 68, leaving two Catholic (General) Epistles to the Church of Christ, known as I Peter and II Peter. He is also generally regarded as being the primary source (i.e., in interview) for the material recorded in the Gospel of Mark.

First-enthroned of the apostles,
teachers of the universe:
Entreat the Master of all
to grant peace to the world,
and to our souls great mercy!

O Lord, You have taken up to eternal rest
and to the enjoyment of Your blessings
the two divinely-inspired preachers, the leaders of the Apostles,
for You have accepted their labors and deaths as a sweet-smelling sacrifice,
for You alone know what lies in the hearts of men.

Today Christ the Rock glorifies with highest honor
The rock of Faith and leader of the Apostles,
Together with Paul and the company of the twelve,
Whose memory we celebrate with eagerness of faith,
Giving glory to the one who gave glory to them!