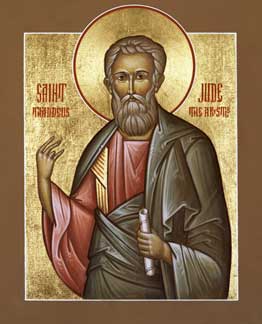 The holy, glorious and all-laudable Apostle Jude was one of the Twelve Apostles of Jesus Christ and his brother, along with St. James, by virtue of being the son of St. Joseph the Betrothed. He is also called Levi or Thaddeus and sometimes the name Jude is rendered as Judas, but he is not to be confused with Judas Iscariot, the Apostle Matthew (also called "Levi"), or the Apostle Thaddeus of the Seventy. He is referenced in the Synoptic Gospels, the Acts of the Apostles, and wrote an epistle which is part of the New Testament. His feast day is on June 19.

Jude was the brother of St. James and son of St. Joseph, Betrothed to the Theotokos. Sometimes he is called Levi or Thaddeus (some English translations call him "Judas"). He protested along with Simon and Hosea when the elderly Joseph wanted to leave a portion of his estate to Jesus upon his death. He was often called 'brother of James' out of humility and shame for he did not believe in Christ at first, yet St. James did.

He was one of the Twelve Apostles (not to be confused with the Thaddeus of the Seventy Apostles) and after the Ascension he preached the Gospel in Judea, Samaria, Galilee, Idumea, Syria, Arabia, Mesopotamia, and Armenia. While preaching in the area around Ararat he was captured by pagans, crucified and killed by being shot with arrows.

Divinely we praise you, O Jude, as a faithful witness,
Knowing you to be the brother of Christ.
You trampled on delusion,
And so preserved the faith.
Today as we celebrate your holy memory,
By your intercessions we receive remission of sins.

You were chosen as a disciple for your firmness of mind:
An unshakable pillar of the Church of Christ,
You proclaimed His word to the Gentiles,
Telling them to believe in one Godhead.
You were glorified by Him, receiving the grace of healing,
Healing the ills of all who came to you,
O most praised Apostle Jude!