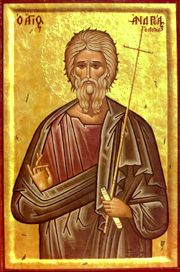 The holy, glorious and all-laudable Apostle Andrew the First-Called was the first of the apostles of Jesus Christ and the brother of the Apostle Peter. His great missionary legacy led him to become the patron saint of several countries, including Romania and Scotland. His feast day is November 30.