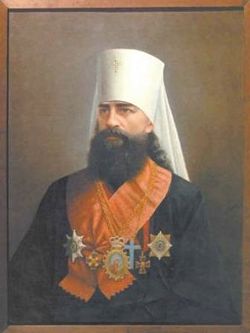 Metropolitan Anthony (Vadkovsky) of St. Petersburg and Ladoga was in the forefront of the renewal and reform effort in the Church of Russia over the turn of the nineteenth to twentieth centuries. He was the first archbishop of the new Diocese of Finland. He strove unsuccessfully to resist the harmful influence of Rasputin on the Tsar Nicholas II and his family, an influence that grew rapidly after his death in 1912.

Alexander Vasillevich Vadkovsky was born on August 3, 1846 in Tambov. He attended the Kazan Theological Academy, from which he graduated in 1870. After graduation he remained at the academy as a lecturer, inspector, and working as editor of the academy’s journal the “Orthodox Interlocutor” (Pravoslavny Sobesdnik). The sudden death of his wife and two children suddenly changed the course of his life as in 1883 he was tonsured a monk with the name Anthony. As a scholar, and now a monastic, Fr. Anthony contributed greatly to the revival of “learned monasticism” that had characterized the hierarchy of the Church before the reforms of the 1860s.

In 1885, Fr. Anthony was assigned as inspector at the St. Petersburg Theological Academy, then in 1887, he became the rector. Among the many students Fr. Anthony nurtured during his time at the academy, that were to become prominent churchmen, were Sergius (Stragorodsky) and Anthony (Kharpovitsky).

In 1887, Fr. Anthony was also consecrated Bishop of Vyborg, vicar of the St. Petersburg Diocese. In 1892, he was elected Archbishop of Finland with the formation of Finland as its own diocese. In 1893, Abp. Anthony was appointed to lead the Commission for Old Catholic Affairs. Then in 1898, he was appointed Metropolitan of St. Petersburg and Ladoga and abbot of Alexander Nevsky Lavra. In 1900, Abp. Anthony was named to the Holy Synod, and, as revolutionary activity increased into the new century, Metr. Anthony became involved in the broader struggle of church reform, both in and outside the Church of Russia.

He argued that the act of religious tolerance enacted in 1905 put the Church at a disadvantage to the other faiths and churches that were freed from state control and interference but was not permitted to Orthodoxy. His position was sent to Tsar Nicholas II by the chairman of the Council of Ministers, Sergei Witte, and became the basis for the popular reform movement in the Orthodox Church that resulted in the convening of the All Russian Local Council of 1917. In 1906, Metr. Anthony was appointed the leader of the Pre-Convocation Commission that was instrumental in the preparations for the 1917 council. Fearing that the Church could be drawn into the political maelstrom that was brewing, Metr. Anthony warned the clergy not to participate in the political parties that were forming in Russia during the early years of the twentieth century.

As a strong proponent of reform in the Church, Metr. Anthony broke with the traditions of succession by seniority in the appointment of clergy to leadership positions of the cathedrals when, in 1912, he appointed the young priest Fr. Philosoph Ornatsky as the dean of Kazan Cathedral in St. Petersburg.

Metr. Anthony reposed in 1912 and was buried in the Nikolskoe Cemetery at Alexander Nevsky Lavra.