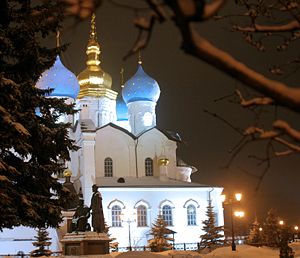 Annunciation Cathedral of Kazan Kremlin (Russian: Благовещенский собор Казанского кремля) was the first Orthodox church within the walls of the Kazan Kremlin. Initially, a wooden church was quickly built under direction of Tsar Ivan IV in 1552, before it was replaced by a stone cathedral. The cathedral became the center of religious and educational life and missionary efforts in the province of Kazan.

The present day great stone cathedral was preceded by a small wooden church built at a spot specified by Tsar Ivan IV (the Terrible) within the half destroyed walls of the Kazan kremlin. Construction of the wooden church began on October 4, 1552, and was completed in three days, on October 6, 1552 [1]. The church was named in honor of the Annunciation of the Most Holy Virgin. Ivan himself outlined the foundation of the church and marked with a cross the intended place for the bishop's throne[1]. The throne was placed in use on July 28, 1555, when Archbishop Gury arrived and was enthroned as the first bishop of the diocese of Kazan.

In 1555, a team of workers, led by master Postnik Yakovlev and mason Ivan Shiryai from Pskov, were directed to Kazan by an imperial letter and tasked to build walls of stone around the fortress. In addition to the walls, the builders erected a stone cathedral, built out of rough-hewn limestone, in place of the wooden church. The new cathedral was consecrated on August 15, 1562. The cathedral had two side altars, on the right dedicated to the martyred saints Boris and Gleb, and on the left dedicated to the Murom miracleworkers, Peter and Fevroniya[1]. Over the years the cathedral received many gifts: icons with gilded silver frames from the tsars and clerical robes, books, and liturgical vessels from Kazan archbishops, local generals, and princes.

Through the centuries the cathedral was ravaged many times by fires. The worst events were in 1596, 1672, 1694, 1742, 1749, and 1757. The repairs and additions made after each fire changed the cathedral significantly; side altars were extended, church porches were added, and cupolas were altered. The most destructive fire was that of 1815. In this fire, that burned down a good part of the city, the cathedral was largely destroyed. Extensive changes were made during its restoration that greatly changed the exterior of the cathedral. Also, a new iconostasis was incorporated that followed the design of the original iconostasis of the early years of the stone cathedral[1].

The relics of the first bishop of Kazan, Abp. Gury have also been associated with Annunciation Cathedral since its inception. In 1630, St. Gury's relics were moved to the cathedral and became the principal relics held by the cathedral. Over the years the relics were moved to various places in the cathedral, before they were taken to the Church of the Varoslavl miracle-makers, in 1918. In 1841, his cell was found under the side church of Ss. Boris and Gleb[1].

After the Bolsheviks came into power in 1917, the cathedral lost its magnificence. The many buildings that were built around the cathedral over the centuries were destroyed in the 1920s. The combination multi-tiered stone bell tower and its church were demolished, while the cupolas and drums, the western porch, and stone facings of the cathedral were disassembled. In 1977, restoration work began. The external walls and the floors were repaired, and the cupolas and crosses were restored. Restoration of the interior of the cathedral did not start until 1997, until various government archives were removed from the building in 1996.

In 1995, the Annunciation complex was transferred to the management of the State Kazan Kremlin History-Architectural Museum, and restoration work began the following years on restoration of the complex to its historical appearance. In November 2000, the Kazan Kremlin was placed on the UNESCO World Heritage list. As the restoration work progressed, the cathedral was opened to accept believers for church services in summer 2005.[2]