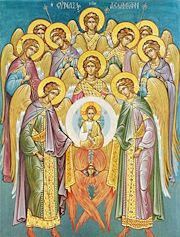 The word angel means "messenger" and this word expresses the nature of angelic service to the human race. Angels are organized into several orders, or Angelic Choirs. The most influential of these classifications was that put forward by pseudo-Dionysius the Areopagite (not to be confused with Dionysius the Areopagite, who was baptized by Saint Paul and lived in the first century, and from whom pseudo-Dionysius took his name) in the fourth or fifth century in his book The Celestial Hierarchy.

The Hellenic concept of the world as "order" and "hierarchy," the strict Platonic division between the "intelligible"
and "sensible" worlds, and the Neoplatonic grouping of beings into "triads" reappear in the famous writings of a
mysterious early-sixth-century writer who wrote under the pseudonym of Dionysius the Areopagite.1